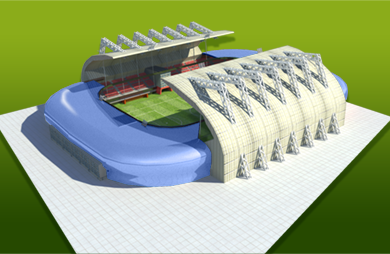 Spectators: 8500 (Terracing: 6376, Seating: 1955, VIP seats: 169) Erland Aurstad started the match with the kick off in front of an excited audience. FC Lakrisal's Constantino Estebe got a good chance for a goal in the 3rd minute, but he totally mistimed the shot and it went over the crossbar. Adrian Landa charged in rather forcefully in the 4th minute of the match, and managed to knock his opponent down. The referee showed Adrian Landa the yellow card, and asked the players to shake hands before continuing play. After a rather tough play, FC Lakrisal's Adrian Landa got a free kick in the 4th minute. Erland Aurstad sent away a hard shot on goal in the 5th minute, but the ball hit the crossbar and went out. A very good chance for a goal. In the 9thth minute of the game Erland Aurstad who was perfectly placed tried to make a shot on goal, but FC Lakrisal's Ludvig Eklund was lucky and managed to grab hold of the ball. The referee was alert and spotted a serious foul by Henrik Konradsen during the 10th minute. The player immediately received a yellow card. Henrik Konradsen hit a great freekick 11 minutes into the match. An unexpectedly hard shot by Constantino Estebe in the 17th minute of play forced Karnes IL's goalkeeper Andreas Høyvik to throw himself to the left, to be able to save the ball. Adrian Landa struck a weak shot in the 25th minute. Andreas Høyvik didn't even have to move as the ball rolled over the line well wide of the goal. A wasted opportunity for FC Lakrisal. Ludvig Eklund showed brilliant goalkeeper skills when he caught the ball after a hard shot from Arvid Lindstrøm in the 32nd minute of the match. In the 34th minute, Adrian Landa left the goalkeeper for dead before tapping the ball into the right side of the net. The FC Lakrisal fans were clearly happy with the effort and the scoreboard reflected the new score: 0-2. After a rather tough play, FC Lakrisal's Per-Kristian Koppang got a free kick in the 41st minute. Ludvig Eklund made an important save on a dangerous shot by Henrik Konradsen in the 44th minute.