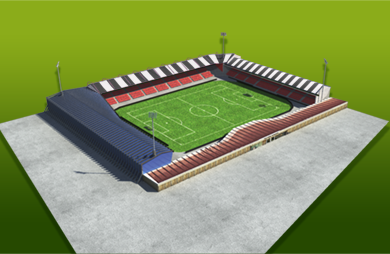 The players of the home team were most fresh-looking when they entered the field to play the second half. Benito Etxekopar was the one to do the kick off. The audience was convinced that Benito Etxekopar's extremely hard shot when he got free in front of the goal was going in, but Atilano Caetano was relentless in the 53rd minute of the game. With a little luck, Club Atlético Atlanta's Alberto Liberto got control of the ball when Marco Servando tried to sneak it across the goal line. After some fancy dribbling in the 57th minute, Celestino Froila managed to get in a good position for a shot. United.SF's supporters rose to their feet, but Celestino Froila was a bit off balance and shot the ball just wide of the left post. Alberto Liberto breathed a sigh of relief and went to take the goal kick. Marco Servando could have scored with his fast shot on goal in the 62nd minute of the match, but Alberto Liberto made a huge save. Carmelo Corderro hit a great freekick 77 minutes into the match. 79 minutes into the game, Marco Servando cracked a shot to the right of the goalkeeper, 1-5. Alberto Liberto was not in position, and could only watch the ball fly in. An unexpectedly hard shot by Marco Servando in the 83rd minute of play forced Club Atlético Atlanta's goalkeeper Alberto Liberto to throw himself to the left, to be able to save the ball. Jonas Abeita hit a great freekick 85 minutes into the match. In the 86th minute of the match Leopoldo Resto shot from a long distance. The ball could have gone into the goal to the right of the goalkeeper, but Atilano Caetano showed his good shape when he easily got hold of the ball. 89 minutes into the match, Marco Servando had an open shot that he just couldn't miss and scored to the right of Alberto Liberto. Club Atlético Atlanta's manager could be seen yelling to the referee that Marco Servando was offside, but the referee ignored the protest. 1-6. The United.SF supporters could be heard counting down the last seconds of the match. They errupted in celebration when the whistle blew, knowing United.SF would go home with victory in their luggage after a match that easily could have ended differently.