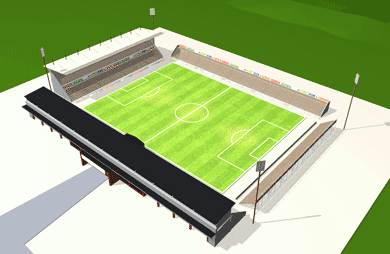 Spectators: 6000 (Terracing: 5000, Seating: 1000, VIP seats: 0) Macedônia FC's Wilian Lira started the match with a crisp pass. The crowd had been anticipating this game for weeks and the excitement in the stadium was easily visible. Roger Dantas showed his good apprehension of the play when he made a fantastic save on a shot from Armandinho Dracena, who was totally free with the ball in the 4th minute. Emílio Leal was in exellent shape and made a fantastic save when he, in the 8th minute of the match, managed to get hold of the ball after a long shot from Laércio Tróia. Rafinha Azevedo hit a great freekick 9 minutes into the match. In the 11th minute Amadeu Baptista shot on, it seemed, an open goal, but Roger Dantas saw the ball coming and threw himself on it before it passed the goal line. In the 12th minute, Rafinha Azevedo hit a crossing free kick to the open man running down the field. Emílio Leal showed brilliant goalkeeper skills when he caught the ball after a hard shot from Wilian Lira in the 14th minute of the match. Amadeu Baptista struck a weak shot in the 16th minute. Roger Dantas didn't even have to move as the ball rolled over the line well wide of the goal. A wasted opportunity for corinthians. When Adrianinho Mangueira fell near the penalty area in the 21st minute he thought he would be awarded a free kick. The referee ignored corinthians's protests and gave Adrianinho Mangueira a yellow card for diving instead. After a rather tough play, corinthians's Adrianinho Mangueira got a free kick in the 21st minute. The long shot by Mauro Mendonça in the 22nd minute really tested Emílio Leal's skills. The ball was on its way into the goal to the left of him when he managed to stretch himself and save the shot and avoid a goal. Gualter Mendonça's shot straight on target was not completely harmless. The ball had pretty good speed, but Emílio Leal firmly grabbed it by the left post. An unexpectedly hard shot by Amadeu Baptista in the 25th minute of play forced Macedônia FC's goalkeeper Roger Dantas to throw himself to the left, to be able to save the ball. After a rather tough play, Macedônia FC's Gualter Mendonça got a free kick in the 28th minute. After a rather tough play, Macedônia FC's Délio Dracena got a free kick in the 31st minute. Laércio Tróia hit a great freekick 33 minutes into the match. Armandinho Dracena sent away a hard shot on goal in the 35th minute, but the ball went just over the crossbar and out. A very good chance. Gualter Mendonça received a nice pass in the box and took a hard shot in the 41st minute. Emílio Leal tensed up and prepared to dive, but the shot went over the goal with him having to interfere. Wilian Lira in the 44thth minute had a little luck and got a chance for a shot in front of the goal. Without hesitation aimed to the right of Emílio Leal, who managed to lunge to the right direction and made a save. If Délio Dracena had kept his shot down it would have been a goal in the 45th minute. The ball went over the crossbar and out instead. After the first half the score was level. The break gave the players a chance to catch their breath, whilst the managers went over the tactics with them again.