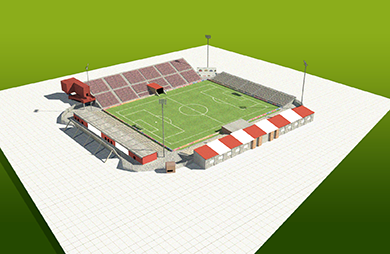 Spectators: 7562 (Terracing: 5742, Seating: 1760, VIP seats: 60) In the 3rd minute Blas Peruanton shot on, it seemed, an open goal, but Michel Myhrvold saw the ball coming and threw himself on it before it passed the goal line. Michel Myhrvold showed his good apprehension of the play when he made a fantastic save on a shot from Blas Peruanton, who was totally free with the ball in the 6th minute. After having played for 10 minutes, Erik Félix managed to get in a good position for a shot on goal. Futbol & Birras's supporters crossed their fingers, but Erik Félix was, after a quick turn that froze the defenders, out of balance and shot the ball just to the right of the goal. Manuel Gaspar could have scored with his fast shot on goal in the 12th minute of the match, but Michel Myhrvold made a huge save. After 14 minutes of play, Club Atlético Talleres's Manuel Gaspar made it 1-0 when he simply outclassed the defender marking him and hit a curling shot into the right side of the net. Michel Myhrvold was left in no man's land by his defense there! The referee was alert and spotted a serious foul by Adan Charro during the 19th minute. The player immediately received a yellow card. Manuel Gaspar in the 22ndth minute had a little luck and got a chance for a shot in front of the goal. Without hesitation aimed to the right of Michel Myhrvold, who managed to lunge to the right direction and made a save. Esteve Bilbo charged in rather forcefully in the 22nd minute of the match, and managed to knock his opponent down. The referee showed Esteve Bilbo the yellow card, and asked the players to shake hands before continuing play. With his leg Michel Myhrvold managed to avoid a goal in the 25thth minute, when Club Atlético Talleres's Manuel Gaspar fired away a shot with a lot of spin towards his right hand side. In the 28th minute, Efrain Emeterio hit a crossing free kick to the open man running down the field. 29 minutes into the match, Jorge Lico notched a goal, 1-1, to the right of Club Atlético Talleres's Baltasar George. Baltasar George was clearly disgusted with the effort of the defense and let the defenders know about it. Michel Myhrvold was out of position in the 33 minute of play, and Manuel Gaspar capitalized on the mistake with a soft shot into the goal. Manuel Gaspar really showed his touch with that goal: 2-1. Michel Myhrvold made an important save on a dangerous shot by Manuel Gaspar in the 36th minute. In the 37th minute Bernardino Enaut shot on, it seemed, an open goal, but Michel Myhrvold saw the ball coming and threw himself on it before it passed the goal line. In the 45th match minute, Club Atlético Talleres was awarded a freekick, the ball was picked up by Bernardino Enaut to maneuver through the defense.