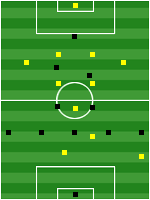 Home
Away
U21 Italy

U21 Mexico's Timoteo Lucero played magnificently when he managed to stop the ball from hitting the goal, after a sharp shot by Felice Gianfrancesco in the 51st minute of play. Ermanno Garro showed brilliant goalkeeper skills when he caught the ball after a hard shot from Desiderio Naelio in the 53rd minute of the match. The corner led U21 Mexico's Ernesto Jorrin to fire away a dangerous shot which Ermanno Garro despite some difficulties managed to get hold on the ball. After a rather tough play, U21 Mexico's Emiliano Toribio got a free kick in the 57th minute. Edoardo Marongiu might have been able to make a better finish in the 60th minute when he tried to place a hard shot over Timoteo Lucero. Instead the ball went over the crossbar and out. Edoardo Marongiu ran back to his position shaking his head. Timoteo Lucero made a wonderful reflex save on a shot from Edoardo Marongiu in the 60th minute of play. With an all-out effort, U21 Italy's Timoteo Lucero threw himself towards the right post 68 minutes into the match and grabbed hold of the ball from Edoardo Marongiu, which otherwise would have been placed in the net. U21 Mexico's Gaston Peter was substituted for Desiderio Naelio. In the 71st minute U21 Italy were awarded a corner. Ciro Pavia went to the cornerflag to take it. A nice corner shot did that Ciro Pavia got away a dangerous shot. Despite this Timoteo Lucero quite easily got ahold of the ball to make the save. In the 72nd minute, Edoardo Marongiu left the goalkeeper for dead before tapping the ball into the right side of the net. The U21 Italy fans were clearly happy with the effort and the scoreboard reflected the new score: 1-1. In the 75th minute Edoardo Marongiu shot on, it seemed, an open goal, but Timoteo Lucero saw the ball coming and threw himself on it before it passed the goal line. In the 76th minute, Marcos Firmo hit a crossing free kick to the open man running down the field. Ermanno Garro took care of the ball after a well-directed shot from Leonides Jatsu, even though the ball almost passed him on his left side. The supporters of U21 Italy booed when U21 Mexico was adjudged a doubtful freekick after 81 match minutes in a wonderful position. Ruben Rolado didn't get a good kick on the ball. Edoardo Marongiu could have scored with his fast shot on goal in the 83rd minute of the match, but Timoteo Lucero made a huge save. Timoteo Lucero showed his good apprehension of the play when he made a fantastic save on a shot from Edoardo Marongiu, who was totally free with the ball in the 85th minute. When U21 Mexico's Leonides Jatsu in the 89th minute got a chance for a shot 89th didn't hesitate and placed the ball to the right of the goalie. A beautiful save bye U21 Italy's goalie prevented a goal. When the match had gone on for 92 minutes, Edoardo Marongiu took a quick shot and it went in 1-2 without a chance for Timoteo Lucero to make any attempt to save it. With a couple of smart ball manuevers Marcos Firmo in the 95th managed to get into a good position. With a left leg Ermanno Garro saved U21 Italy from getting behind. The referee blew the final whistle, and the away crowd roared, having watched U21 Italy eke out a victory against a very well matched opponent.