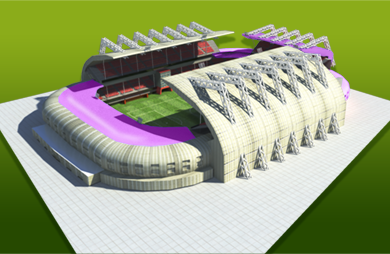 Spectators: 10850 (Terracing: 8139, Seating: 2495, VIP seats: 216) After 2 played minutes Carrapichel - FDFDF got a freekick which was hit by Raí Vinhas. After 3 played minutes, Heavenly Hooters's Tommy Davies shot from a long distance, and at first it looked like the ball was going into the goal, but the goalkeeper Toninho Teles came through and got his fingers on the ball before it flew over the goal line. He then quickly gripped the ball tighter before the forwards in Heavenly Hooters reached it. Harvey Heslop hit a great freekick 4 minutes into the match. Jim Martin showed his good apprehension of the play when he made a fantastic save on a shot from Zé Carlos Quintal, who was totally free with the ball in the 6th minute. In the 9th minute Peter Cunningham shot on, it seemed, an open goal, but Toninho Teles saw the ball coming and threw himself on it before it passed the goal line. In the 11th minute, Amílton Esteves left the goalkeeper for dead before tapping the ball into the right side of the net. The Carrapichel - FDFDF fans were clearly happy with the effort and the scoreboard reflected the new score: 0-1. Carrapichel - FDFDF's Toninho Teles proved his good apprehension of play when he, in the 15th minute of the match, managed to save Carrapichel - FDFDF from getting a goal against them. Carrapichel - FDFDF's Toninho Teles played magnificently when he managed to stop the ball from hitting the goal, after a sharp shot by Justin Cryer in the 19th minute of play. In the 21st match minute, Carrapichel - FDFDF was awarded a freekick, the ball was picked up by Amílton Esteves to maneuver through the defense. In the 23rd minute, Amílton Esteves ran past the defenders and hit a shot which went straight ahead into goal. Jim Martin was frozen by the shot and now it was 0-2. Jim Martin took care of the ball after a well-directed shot from Gildo Salles, even though the ball almost passed him on his left side. Toninho Teles was out of position in the 29 minute of play, and Tommy Davies capitalized on the mistake with a soft shot into the goal. Tommy Davies really showed his touch with that goal: 1-2. Thanks to some nice foot action and superb ball handling Amílton Esteves in the 34th minute a chance for a shot on goal. With an extended leg and a bit of luck Jim Martin prevented the ball from getting in the gole. In the 34thth minute of the game Amílton Esteves who was perfectly placed tried to make a shot on goal, but Heavenly Hooters's Jim Martin was lucky and managed to grab hold of the ball. Peter Cunningham charged in rather forcefully in the 39th minute of the match, and managed to knock his opponent down. The referee showed Peter Cunningham the yellow card, and asked the players to shake hands before continuing play. In the 39th match minute, Heavenly Hooters was awarded a freekick, the ball was picked up by Peter Cunningham to maneuver through the defense. The audience thought a goal was coming when Peter Cunningham got free with Toninho Teles in the 45th minute, but the goalkeeper managed to catch the ball with a huge effort. Jim Martin showed brilliant goalkeeper skills when he caught the ball after a hard shot from Raí Vinhas in the 48th minute of the match.