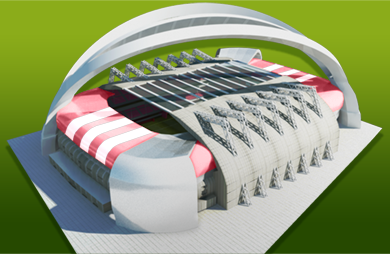 The wind increased when Rolando Oteo made the kick off in the second half. In the 51st minute Norbert Oliszewski shot on, it seemed, an open goal, but Frantzes Bernalda saw the ball coming and threw himself on it before it passed the goal line. The audience thought a goal was coming when Rolando Oteo got free with Zdzislaw Piatek in the 54th minute, but the goalkeeper managed to catch the ball with a huge effort. The referee was alert and spotted a serious foul by Zbyszek Kaczanek during the 54th minute. The player immediately received a yellow card. Rolando Oteo who was well placed in front of the goal fired away a dangerous shot that in the 57thth minute tested the skills of Zdzislaw Piatek when he managed to save the team from getting behind. Frantzes Bernalda made a wonderful reflex save on a shot from Norbert Oliszewski in the 58th minute of play. Frantzes Bernalda stood for a superb save when he managed to get hold of Norbert Oliszewski's shot from short distance in the 65th minute. Roland Marchlewicz hit a great freekick 67 minutes into the match. Zdzislaw Piatek showed brilliant goalkeeper skills when he caught the ball after a hard shot from Rolando Oteo in the 69th minute of the match. After some careless play in the WAL Family United Team defense, Norbert Oliszewski kicked a shot that curved into the net to the right of Frantzes Bernalda. The WAL Family United Team fans voiced their displeasure as they felt that Frantzes Bernalda should have stopped the shot. After 74 minutes, Janusz Kapinos mouthed his way into the referee's book. The tension between the FC Mazovia and the WAL Family United Team players grew even worse after the yellow card. In the 75th minute, Janusz Kapinos hit a crossing free kick to the open man running down the field. FC Mazovia's Zdzislaw Piatek proved his good apprehension of play when he, in the 77th minute of the match, managed to save FC Mazovia from getting a goal against them. The supporters of WAL Family United Team booed when FC Mazovia was adjudged a doubtful freekick after 78 match minutes in a wonderful position. Zbyszek Kaczanek didn't get a good kick on the ball. The supporters of FC Mazovia booed when WAL Family United Team was adjudged a doubtful freekick after 83 match minutes in a wonderful position. Adan Piña didn't get a good kick on the ball. Frantzes Bernalda took care of the ball after a well-directed shot from Norbert Oliszewski, even though the ball almost passed him on his left side. 91 minutes into the match, FC Mazovia's goalkeeper Zdzislaw Piatek had to clear away a ball on his right side after a cunning shot by Botello Palmadas. A collision led to WAL Family United Team getting a freekick after 94 minutes play. Odol Cabaña hit a great ball. The referee felt a red card was in order, 95 minutes into the game, when Odol Cabaña put in a rough tackle. Frantzes Bernalda made a wonderful reflex save on a shot from Ulryk Hendzel in the 97th minute of play. The referee blew the final whistle, and the away crowd roared, having watched WAL Family United Team eke out a victory against a very well matched opponent.