U21 Colombia
vs.
SERBIA FC 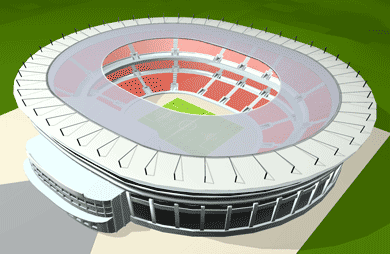 Spectators: 45 (Terracing: 35, Seating: 10, VIP seats: 0) SERBIA FC's Neymar Zika started the match with a crisp pass. The crowd had been anticipating this game for weeks and the excitement in the stadium was easily visible. After a rather tough play, SERBIA FC's Eleuterio Vimaro got a free kick in the 3rd minute. 10 minutes into the game, Gaspar Gervaso threw the ball into play from the sideline. U21 Colombia's Luciano Barreto quickly snatched the ball and retained possesion. Domingos Turienzo stood for a superb save when he managed to get hold of Neymar Zika's shot from short distance in the 12th minute. After 16 played minutes U21 Colombia got a freekick which was hit by Luciano Barreto. Domingos Turienzo made a wonderful reflex save on a shot from Neymar Zika in the 17th minute of play. In the 19th minute Neymar Zika shot on, it seemed, an open goal, but Domingos Turienzo saw the ball coming and threw himself on it before it passed the goal line. In the 30th minute the ball was on its way in behind SERBIA FC's goalkeeper Jonathan Jokin, but with the help of a sacrificing defense, he could catch the ball at the crossbar. Domingos Turienzo took care of the ball after a well-directed shot from Neymar Zika, even though the ball almost passed him on his left side. SERBIA FC's Jonathan Jokin proved his good apprehension of play when he, in the 40th minute of the match, managed to save SERBIA FC from getting a goal against them. U21 Colombia's Don Gato got a good chance for a goal in the 41st minute, but he totally mistimed the shot and it went over the crossbar. Domingos Turienzo showed his good apprehension of the play when he made a fantastic save on a shot from Neymar Zika, who was totally free with the ball in the 46th minute. After the first half SERBIA FC were leading 0-1. They had played with great self confidence throughout the first half and fully deserved their lead.

The players of the away team seemed most concentrated when Don Gato stepped up to make the kick off in the second half. Thanks to some nice foot action and superb ball handling Neymar Zika in the 52nd minute a chance for a shot on goal. With an extended leg and a bit of luck Domingos Turienzo prevented the ball from getting in the gole. Domingos Turienzo showed brilliant goalkeeper skills when he caught the ball after a hard shot from Neymar Zika in the 54th minute of the match. Misael Mesia hit a great freekick 55 minutes into the match. It seemed to be an obvious goal in the 58th minute, but Domingos Turienzo got his fingers on the ball or the save, leaving U21 Colombia hanging dry this time. After 62 played minutes SERBIA FC got a freekick which was hit by Mousa Sissoko. U21 Colombia's Benito Martinez was substituted for Arjen Robben. U21 Colombia made a substitution. Hechter Lastras replaced Rian Giggs. 69 minutes into the match, SERBIA FC's goal looked a bit too open when Neymar Messi came free, but Jonathan Jokin reached the ball before it rolled over the goal line. With a couple of smart ball manuevers Neymar Messi in the 70th managed to get into a good position. With a left leg Jonathan Jokin saved SERBIA FC from getting behind. 72 minutes into the game, Manuel Pepillo recieved a splendid long ball, split the defenders, and gently placed the ball to the left of Domingos Turienzo. Manuel Pepillo showed that you don't have to tear a hole in the net to score, 0-2. Manuel Pepillo might have been able to make a better finish in the 78th minute when he tried to place a hard shot over Domingos Turienzo. Instead the ball went over the crossbar and out. Manuel Pepillo ran back to his position shaking his head. 81 minutes into the match, U21 Colombia's goal looked a bit too open when Manuel Pepillo came free, but Domingos Turienzo reached the ball before it rolled over the goal line. Johan Mojica kicked well hit freekick during the 83rd minute of the match. 84 minutes into the game, SERBIA FC's Manuel Pepillo nearly tore a hole in the net with a booming shot. Domingos Turienzo made a valiant effort, but he could not reach the ball in time, 0-3. In the 87th minute, Neymar Messi got an opportunity to score, but he didn't get a solid hit on the ball and ended up kicking it wide of the goal. The U21 Colombia fans' excitement grew in the 95th match minute when U21 Colombia's Neymar Messi looked to have a clear shot with the ball near the goal. The shot wasn't hard, but the ball still rolled over the goal line to make it 1-3 before the goalkeeper had a chance to intervene. SERBIA FC's supporters were very happy and cheered loudly because their team had won after a very close match.