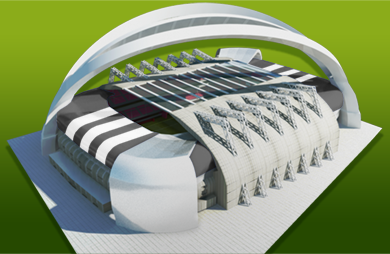 Spectators: 10836 (Terracing: 8128, Seating: 2492, VIP seats: 216) Cylon F.C.'s 柯天希 started the match with a crisp pass. The crowd had been anticipating this game for weeks and the excitement in the stadium was easily visible. In the 4th match minute, Terremoto FC was awarded a freekick, the ball was picked up by Alfonso Dorio to maneuver through the defense. 8 minutes into the match, Cylon F.C.'s goal looked a bit too open when Ivan Chus came free, but 严平洲 reached the ball before it rolled over the goal line. Dante Ixaka was out of position in the 9 minute of play, and 狄超奕 capitalized on the mistake with a soft shot into the goal. 狄超奕 really showed his touch with that goal: 1-0. 肖德乐 made in the 15th minute of the game a throw-in that took a bad bounce and was taken care of by Terremoto FC's Ruben Lizardi. 严平洲 showed his good apprehension of the play when he made a fantastic save on a shot from Luis Venerando, who was totally free with the ball in the 26th minute. 28 minutes into the match, Terremoto FC's goalkeeper Dante Ixaka had to clear away a ball on his right side after a cunning shot by 狄超奕. In the 31st minute Ivan Chus shot on, it seemed, an open goal, but 严平洲 saw the ball coming and threw himself on it before it passed the goal line. 郑志珂 hit a great freekick 34 minutes into the match. After a defensive mix-up in Cylon F.C.'s zone, Luis Venerando stole the ball and had only the goalie to beat. 严平洲 came out of the goal and Luis Venerando tried to chip the ball over his head. To his dismay, the ball went over the crossbar and out of play. Melquiades Jon kicked well hit freekick during the 40th minute of the match. In the 45th minute, 乔庭桦 hit a crossing free kick to the open man running down the field. All the noise was coming from the home fans when the whistle went for half-time. The home team had fought hardest to put themselves in a deserved lead.