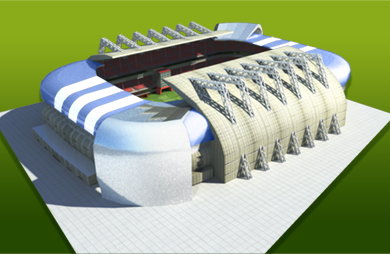 When the second half was about to start, both teams quickly lined up and Xaver Sanez made a kick off. When the match had gone on for 56 minutes, Xaver Sanez took a quick shot and it went in 0-4 without a chance for Quexal Bazo to make any attempt to save it. Quexal Bazo came out of the goal in the 59th minute to try and stop a shot by Echevarria's Xaver Sanez. But to his dismay, Xaver Sanez quickly shot the ball in between his legs and into the goal making it 0-5. After some fancy dribbling in the 65th minute, Otsoko Tio managed to get in a good position for a shot. Bolsimpique Tricolyon's supporters rose to their feet, but Otsoko Tio was a bit off balance and shot the ball just wide of the left post. Normando Laiz breathed a sigh of relief and went to take the goal kick. Echevarria made a substitution. Donato Darroja replaced Mauro Bustio. Quexal Bazo made a wonderful reflex save on a shot from Ronaldinho Gavito in the 68th minute of play. Pellas Meldasgoas succeeded in the game's 69th minute to shoot an unreachable shot under the crossbar and scored - 0-6. Quexal Bazo made a wonderful reflex save on a shot from Xaver Sanez in the 75th minute of play. Bolsimpique Tricolyon's Quexal Bazo proved his good apprehension of play when he, in the 76th minute of the match, managed to save Bolsimpique Tricolyon from getting a goal against them. Normando Laiz made a wonderful reflex save on a shot from Otsoko Tio in the 81st minute of play. Normando Laiz didn't have a chance when a screaming shot from Otsoko Tio went, in the 81st minute, to the upper right corner, 1-6 was the resulting score. Echevarria made a substitution. Botello Arizabaleta replaced Xaver Sanez. Pellas Meldasgoas could have scored with his fast shot on goal in the 88th minute of the match, but Quexal Bazo made a huge save. With splendid footwork Ronaldinho Gavito arrived in front of goal to shoot 1-7 by the left pole in the game's 90th minute. After a rather tough play, Echevarria's Berenguer Erce got a free kick in the 94th minute. With his leg Quexal Bazo managed to avoid a goal in the 98thth minute, when Echevarria's Botello Arizabaleta fired away a shot with a lot of spin towards his right hand side. When the final whistle sounded Echevarria left the ground with the victory after a much better performance than Bolsimpique Tricolyon.