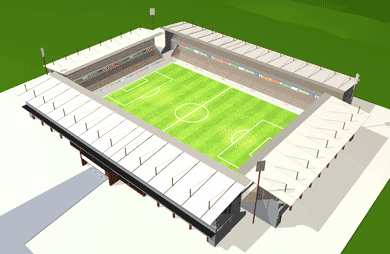 Spectators: 7352 (Terracing: 5515, Seating: 1690, VIP seats: 147) The field was rather wet after several days of rain when Julio Cristofol took the kick off in the first half of the match. A collision led to Yutuyaco AFC getting a freekick after 2 minutes play. Celedonio Janpier hit a great ball. Daniel Brailovsky struck a weak shot in the 12th minute. Orlando Alonso didn't even have to move as the ball rolled over the line well wide of the goal. A wasted opportunity for CASEBONNE PROPIEDADES. 15 minutes into the match, Yutuyaco AFC's goal looked a bit too open when Julio Cristofol came free, but Orlando Alonso reached the ball before it rolled over the goal line. After 16 played minutes CASEBONNE PROPIEDADES got a freekick which was hit by Camilo Gartzen. 18 minutes into the game, Filip Bara cracked a shot to the right of the goalkeeper, 0-2. Orlando Alonso was not in position, and could only watch the ball fly in. A collision led to CASEBONNE PROPIEDADES getting a freekick after 23 minutes play. Örjan Åström hit a great ball. CASEBONNE PROPIEDADES's Daniel Brailovsky got a good chance for a goal in the 30th minute, but he totally mistimed the shot and it went over the crossbar. Thanks to some nice foot action and superb ball handling Josita Pool in the 34th minute a chance for a shot on goal. With an extended leg and a bit of luck Hugo Gatti prevented the ball from getting in the gole. Yutuyaco AFC's Orlando Alonso played magnificently when he managed to stop the ball from hitting the goal, after a sharp shot by Filip Bara in the 36th minute of play. Julio Cristofol scored 0-3 in the 39th match minute with a shot that went into the goal to the right of Orlando Alonso, who was just a little too slow in reacting to the shot. In the 42nd minute Filip Bara shot on, it seemed, an open goal, but Orlando Alonso saw the ball coming and threw himself on it before it passed the goal line. After some careless play in the Yutuyaco AFC defense, Filip Bara kicked a shot that curved into the net to the right of Orlando Alonso. The Yutuyaco AFC fans voiced their displeasure as they felt that Orlando Alonso should have stopped the shot. Even after changing tactics the home team jogged off the field with a 0-4 deficit. They would have to work harder if they wanted to turn things around in the second half.