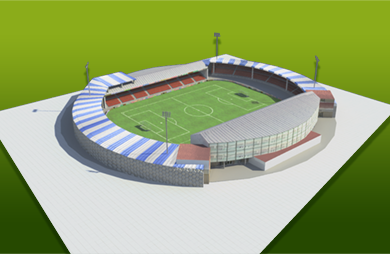 Spectators: 7506 (Terracing: 5630, Seating: 1726, VIP seats: 150) Mateo Mamani made the kick off and thus started the match. Fabio Cabral fired away a screaming shot towards the goal in the 3rd minute, but the shot went just over the crossbar without Sixto Rubio having to interfere. After some careless play in the TALLERES defense, Gerardo Beltran kicked a shot that curved into the net to the right of Francisco Gomesano. The TALLERES fans voiced their displeasure as they felt that Francisco Gomesano should have stopped the shot. Sixto Rubio didn't have a chance when a screaming shot from Fabio Cabral went, in the 8th minute, to the upper right corner, 1-1 was the resulting score. In the 20th minute the ball was on its way in behind Calesita FC's goalkeeper Sixto Rubio, but with the help of a sacrificing defense, he could catch the ball at the crossbar. Sixto Rubio showed brilliant goalkeeper skills when he caught the ball after a hard shot from Mateo Mamani in the 23rd minute of the match. Americo Min lost his temper 24 minutes into the game and shoved another player to the ground. He was immediately shown a red card. The supporters of TALLERES booed when Calesita FC was adjudged a doubtful freekick after 25 match minutes in a wonderful position. Americo Min didn't get a good kick on the ball. Fabio Cabral struck a weak shot in the 25th minute. Sixto Rubio didn't even have to move as the ball rolled over the line well wide of the goal. A wasted opportunity for TALLERES. After 29 minutes of play, TALLERES's Mateo Mamani made it 2-1 when he simply outclassed the defender marking him and hit a curling shot into the right side of the net. Sixto Rubio was left in no man's land by his defense there! In the 34th match minute, Calesita FC was awarded a freekick, the ball was picked up by Gerardo Beltran to maneuver through the defense. Waldemar Ciupierdo made in the 36th minute of the game a throw-in that took a bad bounce and was taken care of by Calesita FC's Aurelio Valery. The audience thought a goal was coming when Fabio Cabral got free with Sixto Rubio in the 38th minute, but the goalkeeper managed to catch the ball with a huge effort. With his leg Sixto Rubio managed to avoid a goal in the 40thth minute, when TALLERES's Mateo Mamani fired away a shot with a lot of spin towards his right hand side. A sloppy throw-in by Adriano Bittencourt in the 43rd minute of the game went astray and was snapped up by Calesita FC's Aquiles Otsoa. No-one was surprised that the home team were leading 2-1 at half-time.