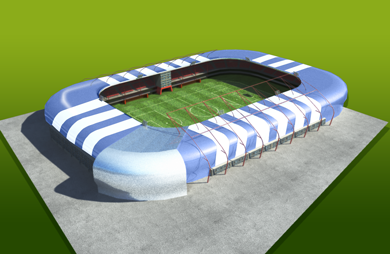 Spectators: 36 (Terracing: 28, Seating: 8, VIP seats: 0) Aureliano Karlo made the kick off and thus started the match. Through an outstanding action, after 4 minutes, Ruben Endura successfully got his hands on the ball before it slid into the goal at the right post. In the 9th minute Herminio Dalmai shot on, it seemed, an open goal, but Roberto Eztebe saw the ball coming and threw himself on it before it passed the goal line. Ruben Endura took care of the ball after a well-directed shot from Aureliano Karlo, even though the ball almost passed him on his left side. In the 14th minute of the match ⫷Ⓕⓤⓢⓘⓞⓝ ⒻⒸ⫸ got a corner. Lobos de Carelia's goalie ran out to the linesman to protest the call, but the linesman resolutely pointed his flag at the cornerflag. Baldomero Norino ran over to the corner to take the kick. 29 minutes into the match, Aureliano Karlo notched a goal, 1-0, to the right of Lobos de Carelia's Ruben Endura. Ruben Endura was clearly disgusted with the effort of the defense and let the defenders know about it. After some fancy dribbling in the 34th minute, Herminio Dalmai managed to get in a good position for a shot. Lobos de Carelia's supporters rose to their feet, but Herminio Dalmai was a bit off balance and shot the ball just wide of the left post. Roberto Eztebe breathed a sigh of relief and went to take the goal kick. In the 37th match minute, Lobos de Carelia was awarded a freekick, the ball was picked up by Herminio Dalmai to maneuver through the defense. Ruben Endura made a wonderful reflex save on a shot from Aureliano Karlo in the 38th minute of play. Roberto Eztebe showed his good apprehension of the play when he made a fantastic save on a shot from Herminio Dalmai, who was totally free with the ball in the 40th minute. The crowd rose to their feet as Natalio Sarracino kicked a wonderful shot that went in to the left of a diving Ruben Endura. That made the score 2-0 in the 42 minute of play. Jacquin Achermann could have scored with his fast shot on goal in the 45th minute of the match, but Ruben Endura made a huge save. The audience was convinced that Herminio Dalmai's extremely hard shot when he got free in front of the goal was going in, but Roberto Eztebe was relentless in the 46th minute of the game. All the noise was coming from the home fans when the whistle went for half-time. The home team had fought hardest to put themselves in a deserved lead.

The players of the away team seemed most concentrated when Herminio Dalmai stepped up to make the kick off in the second half. Through an outstanding action, after 52 minutes, Roberto Eztebe successfully got his hands on the ball before it slid into the goal at the right post. 崔星默 lost his temper 57 minutes into the game and shoved another player to the ground. He was immediately shown a red card. 56 minutes into the game, one of ⫷Ⓕⓤⓢⓘⓞⓝ ⒻⒸ⫸:s players got tackled near the goal, and the referee blew for a penalty. In the 60th minute of the match Lobos de Carelia got a corner. ⫷Ⓕⓤⓢⓘⓞⓝ ⒻⒸ⫸'s goalie ran out to the linesman to protest the call, but the linesman resolutely pointed his flag at the cornerflag. José Garrido ran over to the corner to take the kick. Lobos de Carelia's José Garrido was first on the ball when the corner was shot and he dangerously headed the ball towards goal, but Roberto Eztebe in the goal jumped up to prevent it from getting in. Lobos de Carelia's Ruben Endura played magnificently when he managed to stop the ball from hitting the goal, after a sharp shot by Jacquin Achermann in the 64th minute of play. Ruben Endura didn't have a chance when a screaming shot from Jacquin Achermann went, in the 64th minute, to the upper right corner, 3-0 was the resulting score. Natalio Sarracino scored 4-0 in the 67th match minute with a shot that went into the goal to the right of Ruben Endura, who was just a little too slow in reacting to the shot. 74 minutes into the match, ⫷Ⓕⓤⓢⓘⓞⓝ ⒻⒸ⫸'s goalkeeper Roberto Eztebe had to clear away a ball on his right side after a cunning shot by Mito Pankov. 76 minutes into the match, Lobos de Carelia's goal looked a bit too open when Honorio Jokin came free, but Ruben Endura reached the ball before it rolled over the goal line. 83 minutes in the game Eugenio Petrigai did a throw-in, and the ball was quickly in game thanks to Herminio Dalmai. After a rather tough play, ⫷Ⓕⓤⓢⓘⓞⓝ ⒻⒸ⫸'s Honorio Jokin got a free kick in the 85th minute. After 88 played minutes Lobos de Carelia got a freekick which was hit by Eugenio Petrigai. Lobos de Carelia's Ruben Endura played magnificently when he managed to stop the ball from hitting the goal, after a sharp shot by Wojciech Fiszer in the 90th minute of play. Wojciech Fiszer fired away a difficult shot at goal in the 96th minute. He almost succeeded, but the ball went over. It was a very nice shot. The crowd rose to their feet and cheered when the referee blew the final whistle. ⫷Ⓕⓤⓢⓘⓞⓝ ⒻⒸ⫸ had won after a very even match.