ALL RAVENS
vs.
Portus Ganda 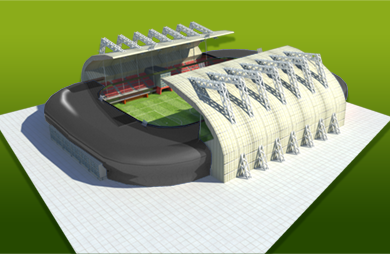 Spectators: 156 (Terracing: 117, Seating: 36, VIP seats: 3) Dark clouds were building up when the players entered the field. None of the them looked very eager to play. Martijn Rockloos started the match with the kick off. In the 3rd minute, Filomeno Txordon left the goalkeeper for dead before tapping the ball into the right side of the net. The ALL RAVENS fans were clearly happy with the effort and the scoreboard reflected the new score: 1-0. In the 6th minute, Portus Ganda's Jorden Stuckers seemed to kick out at an opponent. The referee saw this and, surprisingly, showed Jorden Stuckers the red card, dismissing him from the pitch. The coaching staff of Portus Ganda protested bitterly, but the referee would have none of it, and Jorden Stuckers had no choice but to slowly walk off the pitch. The supporters of ALL RAVENS booed when Portus Ganda was adjudged a doubtful freekick after 7 match minutes in a wonderful position. Jorden Stuckers didn't get a good kick on the ball. Filiberto Pagomari recieved an excellent pass in front of the goal in the 8th minute. Unfortunately, he received the ball on his off foot and could only manage a weak shot that went over the goal. After a rather tough play, Portus Ganda's Martijn Rockloos got a free kick in the 9th minute. 14 minutes into the match, Portus Ganda's Gino Boegaerts broke free and took a long shot that unfortunately flew wide. A fine initiative that could have resulted in a goal. When Dimitry Van Der Eyde came up free with the goalie in the 16th minute, the Portus Ganda fans jumped to their feet. But the shot missed the goal by a fraction of an inch, and the fans sat back down disappointed that Dimitry Van Der Eyde couldn't finish the play. 18 minutes into the game, Portus Ganda's Izak Imbrechs nearly tore a hole in the net with a booming shot. Aristides Remigio made a valiant effort, but he could not reach the ball in time, 1-1. Filomeno Txordon came free with the goalkeeper in the 23rd minute of the match, and shot straight on target. The shot was a little too simple and Joonatan Van Landewijck could save by the left post. Joonatan Van Landewijck showed brilliant goalkeeper skills when he caught the ball after a hard shot from Lorenzo Jenaro in the 26th minute of the match. A collision led to Portus Ganda getting a freekick after 28 minutes play. Izak Imbrechs hit a great ball. Georges-Philippe Wijngaerts kicked well hit freekick during the 30th minute of the match. After a defensive mix-up in Portus Ganda's zone, Eleuterio Cristofor stole the ball and had only the goalie to beat. Joonatan Van Landewijck came out of the goal and Eleuterio Cristofor tried to chip the ball over his head. To his dismay, the ball went over the crossbar and out of play. The referee was alert and spotted a serious foul by Izak Imbrechs during the 33rd minute. The player immediately received a yellow card. After a rather tough play, Portus Ganda's Izak Imbrechs got a free kick in the 33rd minute. When ALL RAVENS's Eleuterio Cristofor in the 34th minute got a chance for a shot 34th didn't hesitate and placed the ball to the right of the goalie. A beautiful save bye Portus Ganda's goalie prevented a goal. Izak Imbrechs fired away a screaming shot towards the goal in the 35th minute, but the shot went just over the crossbar without Aristides Remigio having to interfere. Georges-Philippe Wijngaerts received a nice pass in the box and took a hard shot in the 37th minute. Aristides Remigio tensed up and prepared to dive, but the shot went over the goal with him having to interfere. In the 39th minute Eleuterio Cristofor shot on, it seemed, an open goal, but Joonatan Van Landewijck saw the ball coming and threw himself on it before it passed the goal line. Joonatan Van Landewijck didn't have a chance when a screaming shot from Honorato Ignazio went, in the 41st minute, to the upper right corner, 2-1 was the resulting score. In the 44th minute, Eleuterio Cristofor got an opportunity to score, but he didn't get a solid hit on the ball and ended up kicking it wide of the goal. The away team players looked dejected as the walked off the pitch at half time. They had fought hard, but were still losing 2-1.