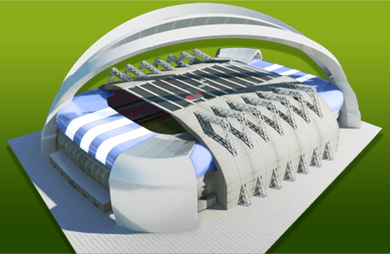 Spectators: 47 (Terracing: 36, Seating: 11, VIP seats: 0) The sun was shining, the grass was green and the audience cheered when Roger Milla got the match started through his kick off. The audience was convinced that Roger Milla's extremely hard shot when he got free in front of the goal was going in, but Enéas Tepedino was relentless in the 5th minute of the game. In the 7th match minute, Juvenilla FC was awarded a freekick, the ball was picked up by Andreas Bendixen to maneuver through the defense. After some careless play in the COMBINADO F.C. FDFDF defense, Roger Milla kicked a shot that curved into the net to the right of Enéas Tepedino. The COMBINADO F.C. FDFDF fans voiced their displeasure as they felt that Enéas Tepedino should have stopped the shot. Enéas Tepedino took care of the ball after a well-directed shot from Roger Milla, even though the ball almost passed him on his left side. 26 minutes into the match, Juvenilla FC's Roger Milla sent off a blazing shot straight on target, a shot that Enéas Tepedino narrowly saved just below the crossbar. Roger Milla received a nice pass, split the defenders, and ran untouched towards the goal. Enéas Tepedino came out and tried to block the shot, but Roger Milla slotted it home off the left post making it 2-0 in the 26th minute. In the 30th minute, Long Cheng Xuan sent off a long shot on goal, but the shot was nowhere near the goal and Juvenilla FC's Agustin Chan didn't even have to move. In the 32nd minute, Pavlos Macheridis got an opportunity to score, but he didn't get a solid hit on the ball and ended up kicking it wide of the goal. Enéas Tepedino made an important save on a dangerous shot by Roger Milla in the 42nd minute. 47 minutes into the game, Andreas Bendixen was given a yellow card after he appeared to trip an opposing player. Juvenilla FC's manager was livid on the sidelines, but the referee was unmoved and gave COMBINADO F.C. FDFDF the free kick. The away team players looked dejected as the walked off the pitch at half time. They had fought hard, but were still losing 2-0.

The wind increased when Pavlos Macheridis made the kick off in the second half. Roger Milla might have been able to make a better finish in the 55th minute when he tried to place a hard shot over Enéas Tepedino. Instead the ball went over the crossbar and out. Roger Milla ran back to his position shaking his head. In the 55th minute Roger Milla shot on, it seemed, an open goal, but Enéas Tepedino saw the ball coming and threw himself on it before it passed the goal line. Edgar Lira hit a great freekick 57 minutes into the match. The supporters of Juvenilla FC booed when COMBINADO F.C. FDFDF was adjudged a doubtful freekick after 59 match minutes in a wonderful position. Edgar Lira didn't get a good kick on the ball. 60 minutes into the game, Roger Milla cracked a shot to the right of the goalkeeper, 3-0. Enéas Tepedino was not in position, and could only watch the ball fly in. COMBINADO F.C. FDFDF made a substitution. Diogo dos Santos replaced Pavlos Macheridis. COMBINADO F.C. FDFDF's Danilo Paraense was substituted for Qin Jun Peng. Agustin Chan had great luck who in the 67thth minute grab hold of the ball when Diogo dos Santos from a short distance tried to put the ball inside the right post. With a couple of smart ball manuevers Diogo dos Santos in the 67th managed to get into a good position. With a left leg Agustin Chan saved Juvenilla FC from getting behind. COMBINADO F.C. FDFDF's Sandro Souto was substituted for Neymar Håland. The corner ended in Diogo dos Santos almost managing to get the ball behind the net, but Juvenilla FC's Agustin Chan did a great save. Augusto Aznaro recieved an excellent pass in front of the goal in the 74th minute. Unfortunately, he received the ball on his off foot and could only manage a weak shot that went over the goal. 82 minutes into the match, Juvenilla FC's goalkeeper Agustin Chan had to clear away a ball on his right side after a cunning shot by Danilo Paraense. In the 93rd match minute, COMBINADO F.C. FDFDF was awarded a freekick, the ball was picked up by José Luis Perlasov to maneuver through the defense. 96 minutes had been played when some careless play by COMBINADO F.C. FDFDF's defense caused the ball to cross the line for a corner. Aquiles Cebo was slow to take the kick. During this time Juvenilla FC's players had a chance to rest.