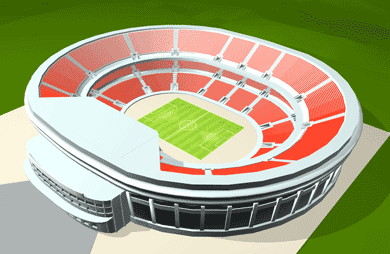 Spectators: 7875 (Terracing: 5907, Seating: 1811, VIP seats: 157) The sun was shining, the grass was green and the audience cheered when Emerson Villalobos got the match started through his kick off. In the 3rd minute Camillo Capaldo shot on, it seemed, an open goal, but Alvaro Salinas saw the ball coming and threw himself on it before it passed the goal line. Alvaro Salinas didn't have a chance when a screaming shot from Sinan Gümüş went, in the 6th minute, to the upper right corner, 1-0 was the resulting score. 14 minutes into the match, XxREALES x CHAPINESxX's Camillo Capaldo sent off a blazing shot straight on target, a shot that Alvaro Salinas narrowly saved just below the crossbar. In the 16th match minute, XxREALES x CHAPINESxX was awarded a freekick, the ball was picked up by Ke Xing Yuan to maneuver through the defense. Sinan Gümüş fired away a screaming shot towards the goal in the 20th minute, but the shot went just over the crossbar without Alvaro Salinas having to interfere. With a couple of smart ball manuevers Camillo Capaldo in the 21st managed to get into a good position. With a left leg Alvaro Salinas saved Darlington from getting behind. Emerson Villalobos sent away a hard shot on goal in the 22nd minute, but the ball went just over the crossbar and out. A very good chance. Alvaro Salinas showed brilliant goalkeeper skills when he caught the ball after a hard shot from Camillo Capaldo in the 28th minute of the match. XxREALES x CHAPINESxX were awarded a corner in the 29th minute after Darlington's defender lost control of the ball, allowing it to roll out over the line. Sinan Gümüş took the corner. The corner went over the outstretched arms of Darlington's goalie and right to Ercole Madonna. He fired away a shot at goal, but the shot had too much spin, and it went just outside the goal. Darlington's manager breathed a sigh of relief on the sidelines as his team had managed to escape an almost certain goal. After some fancy dribbling in the 33rd minute, Camillo Capaldo managed to get in a good position for a shot. XxREALES x CHAPINESxX's supporters rose to their feet, but Camillo Capaldo was a bit off balance and shot the ball just wide of the left post. Alvaro Salinas breathed a sigh of relief and went to take the goal kick. 38 minutes into the game, Camillo Capaldo recieved a splendid long ball, split the defenders, and gently placed the ball to the left of Alvaro Salinas. Camillo Capaldo showed that you don't have to tear a hole in the net to score, 2-0. Alexander Mejia showed brilliant goalkeeper skills when he caught the ball after a hard shot from Emerson Villalobos in the 46th minute of the match. XxREALES x CHAPINESxX's Jérémy López was substituted for Camillo Capaldo. No-one was surprised that the home team were leading 2-0 at half-time.