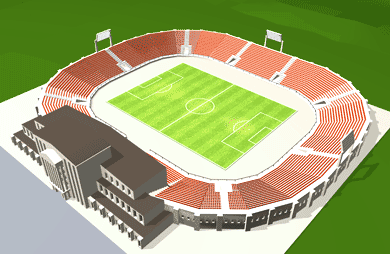 Spectators: 7081 (Terracing: 5313, Seating: 1628, VIP seats: 140) Rigoberto Bartuelo received a nice pass in the box and took a hard shot in the 5th minute. Jonathan Ostots tensed up and prepared to dive, but the shot went over the goal with him having to interfere. After 6 played minutes Arthus F.C got a freekick which was hit by Silverio Frechoso. 11 minutes into the match, Dep Santamarina De Tandil's goal looked a bit too open when Efrain Iago came free, but Robert Ledesma reached the ball before it rolled over the goal line. In the 15th minute of the match Dep Santamarina De Tandil got a corner. Arthus F.C's goalie ran out to the linesman to protest the call, but the linesman resolutely pointed his flag at the cornerflag. Gregorio Oliveiro ran over to the corner to take the kick. Dep Santamarina De Tandil's Gregorio Oliveiro was first on the ball when the corner was shot and he dangerously headed the ball towards goal, but Jonathan Ostots in the goal jumped up to prevent it from getting in. Emiliano Ferrer's shot was meant for the net just under the crossbar, but Jonathan Ostots read the situation well and was quickly in position to make a wonderful save in the 16th minute of play. Robert Ledesma showed brilliant goalkeeper skills when he caught the ball after a hard shot from Dalmacio Sanson in the 23rd minute of the match. Robert Ledesma made a wonderful reflex save on a shot from Raimundo Rufo in the 25th minute of play. A hard shot 27 in the game by Santos Cordareo from a close distance when the talented Jonathan Ostots managed to make a qualified save. Arthus F.C's players were relieved. Emiliano Ferrer recieved an excellent pass in front of the goal in the 29th minute. Unfortunately, he received the ball on his off foot and could only manage a weak shot that went over the goal. The audience was convinced that Santos Cordareo's extremely hard shot when he got free in front of the goal was going in, but Jonathan Ostots was relentless in the 33rd minute of the game. Robert Ledesma took care of the ball after a well-directed shot from Efrain Iago, even though the ball almost passed him on his left side. In the 36th minute, Gervasio Mendebal hit a crossing free kick to the open man running down the field. An unexpectedly hard shot by Rodrigo Silbestre in the 38th minute of play forced Dep Santamarina De Tandil's goalkeeper Robert Ledesma to throw himself to the left, to be able to save the ball. The first half was very even, with the score at 0-0 when the whistle went for half-time. The players welcomed the break and quickly retired to the dressing rooms.