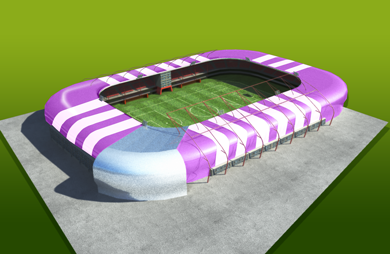 Spectators: 7251 (Terracing: 5440, Seating: 1667, VIP seats: 144) The mood of the audience was pleasant when Gerardo Enol made the kick off which started today's match. When Villars's Israel Sidoro in the 4th minute got a chance for a shot 4th didn't hesitate and placed the ball to the right of the goalie. A beautiful save bye EMMA FC's goalie prevented a goal. 9 minutes into the match, EMMA FC's goal looked a bit too open when Joaquin Salbatore came free, but Paulo Bernaldo reached the ball before it rolled over the goal line. Paulo Bernaldo showed brilliant goalkeeper skills when he caught the ball after a hard shot from Venancio Gaufred in the 10th minute of the match. 16 minutes into the match, Joaquin Salbatore had an open shot that he just couldn't miss and scored to the right of Paulo Bernaldo. EMMA FC's manager could be seen yelling to the referee that Joaquin Salbatore was offside, but the referee ignored the protest. 1-1. Joaquin Salbatore sent away a hard shot on goal in the 21st minute, but the ball went just over the crossbar and out. A very good chance. In the 24th minute, Joaquin Salbatore got an opportunity to score, but he didn't get a solid hit on the ball and ended up kicking it wide of the goal. The referee was alert and spotted a serious foul by Matias Nuxila during the 25th minute. The player immediately received a yellow card. Matias Nuxila hit a great freekick 25 minutes into the match. The audience was convinced that Joaquin Salbatore's extremely hard shot when he got free in front of the goal was going in, but Paulo Bernaldo was relentless in the 30th minute of the game. When Julian Bonadona fell near the penalty area in the 31st minute he thought he would be awarded a free kick. The referee ignored EMMA FC's protests and gave Julian Bonadona a yellow card for diving instead. Julian Bonadona kicked well hit freekick during the 31st minute of the match. Paulo Bernaldo stood for a superb save when he managed to get hold of Joaquin Salbatore's shot from short distance in the 33rd minute. Villars's Venancio Gaufred got a good chance for a goal in the 34th minute, but he totally mistimed the shot and it went over the crossbar. EMMA FC's Paulo Bernaldo played magnificently when he managed to stop the ball from hitting the goal, after a sharp shot by Joaquin Salbatore in the 40th minute of play. In the 42nd minute, Julian Bonadona hit a crossing free kick to the open man running down the field. Paulo Bernaldo showed brilliant goalkeeper skills when he caught the ball after a hard shot from Joaquin Salbatore in the 43rd minute of the match. After the first half the score was level. The break gave the players a chance to catch their breath, whilst the managers went over the tactics with them again.