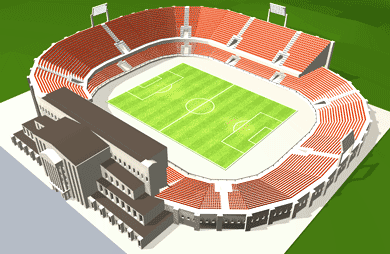 When the second half was about to start, both teams quickly lined up and Domingo Artal made a kick off. If David Soin had kept his shot down it would have been a goal in the 55th minute. The ball went over the crossbar instead. 58 minutes into the match, Cayetano Demario had an open shot that he just couldn't miss and scored to the right of Benicio Edorta. Cuevas FC's manager could be seen yelling to the referee that Cayetano Demario was offside, but the referee ignored the protest. 5-1. With a little luck, Marull's Constantino Calvet got control of the ball when Domingo Artal tried to sneak it across the goal line. After a rather tough play, Marull's David Soin got a free kick in the 65th minute. Marull's Constantino Calvet played magnificently when he managed to stop the ball from hitting the goal, after a sharp shot by Pablo Montxo in the 67th minute of play. Marull's defense didn't have a chance, in the 68th minute, when Pablo Montxo scored to the left of an out of position Constantino Calvet, making the score, 5-2. Domingo Artal sent away a hard shot on goal in the 82nd minute, but the ball hit the crossbar and went out. A very good chance for a goal. 87 minutes into the game, Cuevas FC's Domingo Artal nearly tore a hole in the net with a booming shot. Constantino Calvet made a valiant effort, but he could not reach the ball in time, 5-4. Domingo Artal took the ball and in the 97 minute, shot a rapid shot to the right of a surprised Constantino Calvet. Constantino Calvet dived to the right, and did manage to get a hand on the shot, but it still went into the right corner making it 5-6. The Marull fans had already started to leave before the final whistle blew. Cuevas FC were clearly better and deserved to take the win.