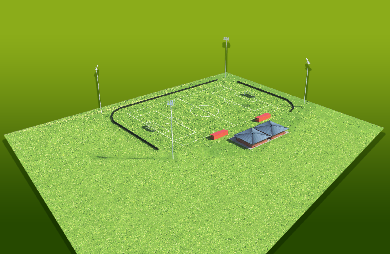 Spectators: 5000 (Terracing: 4000, Seating: 1000, VIP seats: 0) 3 minutes into the match, Carpintería AFC's goal looked a bit too open when Gervasio Chuan came free, but Baltasar Florinio reached the ball before it rolled over the goal line. After some careless play in the Carpintería AFC defense, Candido Dolfo kicked a shot that curved into the net to the right of Baltasar Florinio. The Carpintería AFC fans voiced their displeasure as they felt that Baltasar Florinio should have stopped the shot. Baltasar Florinio came out of the goal in the 10th minute to try and stop a shot by Alsa's Candido Dolfo. But to his dismay, Candido Dolfo quickly shot the ball in between his legs and into the goal making it 0-2. After 12 played minutes Carpintería AFC got a freekick which was hit by Tadeo Lluques. After a rather tough play, Alsa's Aldo Galsino got a free kick in the 14th minute. 19 minutes into the game, Alsa's Denis Gentza nearly tore a hole in the net with a booming shot. Baltasar Florinio made a valiant effort, but he could not reach the ball in time, 0-3. Baltasar Florinio showed his good apprehension of the play when he made a fantastic save on a shot from Gervasio Chuan, who was totally free with the ball in the 22nd minute. 龚笑棋 made an important save on a dangerous shot by Tadeo Lluques in the 24th minute. In the 25th minute, Ismael Bernebe left the goalkeeper for dead before tapping the ball into the right side of the net. The Alsa fans were clearly happy with the effort and the scoreboard reflected the new score: 0-4. Dionisio Jakes received a nice pass in the box and took a hard shot in the 31st minute. 龚笑棋 tensed up and prepared to dive, but the shot went over the goal with him having to interfere. Baltasar Florinio took care of the ball after a well-directed shot from Gervasio Chuan, even though the ball almost passed him on his left side. 龚笑棋 made a fantastic save in the 34th minute, when Saul Ferdinand sent off a good shot on target. Baltasar Florinio made a wonderful reflex save on a shot from Candido Dolfo in the 38th minute of play. Dionisio Jakes kicked well hit freekick during the 38th minute of the match. Baltasar Florinio didn't succeed to prevent the ball from going into goal when Alsa's Candido Dolfo shot an unexpected shot in the crossbar's under edge and made 0-5 in the ordered_time% minute. After some fancy dribbling in the 46th minute, Ismael Bernebe managed to get in a good position for a shot. Alsa's supporters rose to their feet, but Ismael Bernebe was a bit off balance and shot the ball just wide of the left post. Baltasar Florinio breathed a sigh of relief and went to take the goal kick. After the first half Alsa were leading 0-5. They had played with great self confidence throughout the first half and fully deserved their lead.

Baltasar Florinio made a fantastic save in the 51st minute, when Candido Dolfo sent off a good shot on target. In the 58th minute Ismael Bernebe shot on, it seemed, an open goal, but Baltasar Florinio saw the ball coming and threw himself on it before it passed the goal line. Carpintería AFC's Baltasar Florinio proved his good apprehension of play when he, in the 60th minute of the match, managed to save Carpintería AFC from getting a goal against them. Arnaldo Beltran made in the 63rd minute of the game a throw-in that took a bad bounce and was taken care of by Carpintería AFC's Albano Ostots. In the 68th minute, Tadeo Lluques hit a crossing free kick to the open man running down the field. Carpintería AFC's goalkeeper couldn't reach when Gervasio Chuan 70 minutes into the game got a good kick on the ball which found its way into goal just inside left pole. 0-6. 龚笑棋 showed his good apprehension of the play when he made a fantastic save on a shot from Dionisio Jakes, who was totally free with the ball in the 75th minute. Saul Ferdinand fired away a screaming shot towards the goal in the 76th minute, but the shot went just over the crossbar without 龚笑棋 having to interfere. With a little luck, Carpintería AFC's Baltasar Florinio got control of the ball when Ismael Bernebe tried to sneak it across the goal line. Guido Lekubegi was astounded when the referee showed him the red card after a seemingly innocent challenge, 79 minutes into the match. Guido Lekubegi kicked well hit freekick during the 80th minute of the match. After having played for 81 minutes, Dionisio Jakes managed to get in a good position for a shot on goal. Carpintería AFC's supporters crossed their fingers, but Dionisio Jakes was, after a quick turn that froze the defenders, out of balance and shot the ball just to the right of the goal. Alsa's 龚笑棋 played magnificently when he managed to stop the ball from hitting the goal, after a sharp shot by Tadeo Lluques in the 86th minute of play. 89 minutes into the game, Candido Dolfo recieved a splendid long ball, split the defenders, and gently placed the ball to the left of Baltasar Florinio. Candido Dolfo showed that you don't have to tear a hole in the net to score, 0-7. Baltasar Florinio made a wonderful reflex save on a shot from Gervasio Chuan in the 94th minute of play. Alsa played a much better game than Carpintería AFC and deserved their victory. The Carpintería AFC players were clearly disappointed as they left the ground.