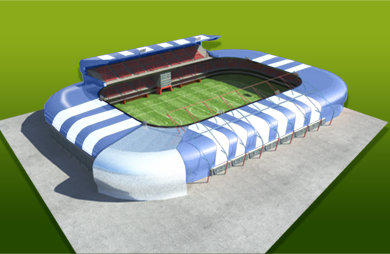 Spectators: 7997 (Terracing: 5999, Seating: 1839, VIP seats: 159) After a rather tough play, WYBRZEZE's Radoslaw Pincoski got a free kick in the 4th minute. The supporters of WYBRZEZE booed when Leeds United was adjudged a doubtful freekick after 7 match minutes in a wonderful position. Barnaba Luty didn't get a good kick on the ball. In the 11th minute, Wladyslaw Lech left the goalkeeper for dead before tapping the ball into the right side of the net. The Leeds United fans were clearly happy with the effort and the scoreboard reflected the new score: 0-1. Yannic Bielstein recieved an excellent pass in front of the goal in the 14th minute. Unfortunately, he received the ball on his off foot and could only manage a weak shot that went over the goal. Fryderyk Podolski sent away a hard shot on goal in the 22nd minute, but the ball went just over the crossbar and out. A very good chance. WYBRZEZE's attacker deliberately struck the ball against an opponent to win a corner for his team. The corner was taken by Lucjan Radziszewski in the 25th minute. WYBRZEZE's Wasyl Sedzikowski played magnificently when he managed to stop the ball from hitting the goal, after a sharp shot by Bartolo Matthew in the 29th minute of play. Stanislaw Barna hit a great freekick 30 minutes into the match. Yannic Bielstein shot from long distance after 31 played minutes, a shot that Wasyl Sedzikowski with certain difficulty stopped from going in under the crossbar. Pastor Gumaro scored 1-1 in the 33rd match minute with a shot that went into the goal to the right of Benedykt Galaska, who was just a little too slow in reacting to the shot. 36 minutes into the match, Leeds United's goalkeeper Benedykt Galaska had to clear away a ball on his right side after a cunning shot by Kardo Kasimir. Yannic Bielstein might have been able to make a better finish in the 37th minute when he tried to place a hard shot over Wasyl Sedzikowski. Instead the ball went over the crossbar and out. Yannic Bielstein ran back to his position shaking his head. Yannic Bielstein struck a weak shot in the 39th minute. Wasyl Sedzikowski didn't even have to move as the ball rolled over the line well wide of the goal. A wasted opportunity for Leeds United. In the 40th match minute, WYBRZEZE was awarded a freekick, the ball was picked up by Korneliusz Sliwinski to maneuver through the defense. Kardo Kasimir kicked a quick shot right in front of the goal in the 46thth minute. Though ot was a great shot Leeds United's keeper Benedykt Galaska was sill able to block leaving the score board unchanged. The first half was very even, with the score at 1-1 when the whistle went for half-time. The players welcomed the break and quickly retired to the dressing rooms.

The wind increased when Kardo Kasimir made the kick off in the second half. Zdzislaw Bartelak kicked well hit freekick during the 54th minute of the match. With his leg Wasyl Sedzikowski managed to avoid a goal in the 55thth minute, when Leeds United's Bartolo Matthew fired away a shot with a lot of spin towards his right hand side. When Bartolo Matthew in the 55th play minute got the chance to kick a hard shot on goal from short distance neither the defense or Wasyl Sedzikowski kept up with the ball and suddenly the score was 1-2 when the ball slipped into goal inside the left pole. Kardo Kasimir sent away a hard shot on goal in the 58th minute, but the ball went just over the crossbar and out. A very good chance. In the 68th minute of the match, Wladyslaw Lech got a very nice opportunity to score, but Wasyl Sedzikowski was well-placed and pushed the ball away from the goal at the left post. 80 minutes into the match, WYBRZEZE's goalkeeper Wasyl Sedzikowski had to clear away a ball on his right side after a cunning shot by Bartolo Matthew. Benedykt Galaska made a wonderful reflex save on a shot from Radoslaw Pincoski in the 81st minute of play. Benedykt Galaska showed his good apprehension of the play when he made a fantastic save on a shot from Pastor Gumaro, who was totally free with the ball in the 86th minute. The supporters of WYBRZEZE booed when Leeds United was adjudged a doubtful freekick after 87 match minutes in a wonderful position. Fryderyk Podolski didn't get a good kick on the ball. WYBRZEZE's Witold Dziurowicz was substituted for Radomil Miecznikowski. Fryderyk Podolski hit a great freekick 89 minutes into the match. In the 90th minute of the match Lucjan Radziszewski shot from a long distance. The ball could have gone into the goal to the right of the goalkeeper, but Benedykt Galaska showed his good shape when he easily got hold of the ball. The Leeds United supporters could be heard counting down the last seconds of the match. They errupted in celebration when the whistle blew, knowing Leeds United would go home with victory in their luggage after a match that easily could have ended differently.