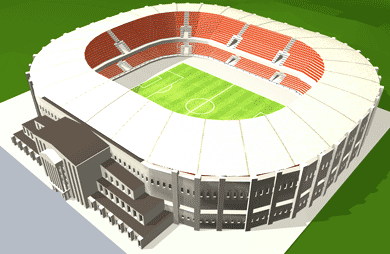 Spectators: 7663 (Terracing: 5748, Seating: 1762, VIP seats: 153) The field was rather wet after several days of rain when Victoriano Mingo took the kick off in the first half of the match. When Celso Filipo fell near the penalty area in the 3rd minute he thought he would be awarded a free kick. The referee ignored Desfachatados F.C.'s protests and gave Celso Filipo a yellow card for diving instead. 4 minutes into the match, Desfachatados F.C.'s goal looked a bit too open when Victor Abilio came free, but Aquilino Felo reached the ball before it rolled over the goal line. Anier Urbasa fired away a screaming shot towards the goal in the 6th minute, but the shot went just over the crossbar without Lucas Casado having to interfere. In the 8th match minute, Desfachatados F.C. was awarded a freekick, the ball was picked up by Ernesto Errolan to maneuver through the defense. Lisandro Miliano hit a great freekick 17 minutes into the match. Leopoldo Salvadore's late challenge caught a Desfachatados F.C.'s player on the shin and left him crawling around in pain. The referee blew his whistle and produced the yellow card. Leopoldo Salvadore helped the player get up and apologised. Leopoldo Salvadore hit a great freekick 20 minutes into the match. Abelardo Tome took a chance and fired a shot far from the goal in the 20th minute, but it turned out to be a dangerous situation for Lucas Casado. Vipos FC's goalkeeper really had to stretch himself to stop the ball from crossing the goal line. The supporters of Vipos FC booed when Desfachatados F.C. was adjudged a doubtful freekick after 21 match minutes in a wonderful position. Celso Filipo didn't get a good kick on the ball. In the 24thth minute of the game Robustiano Machado who was perfectly placed tried to make a shot on goal, but Vipos FC's Lucas Casado was lucky and managed to grab hold of the ball. Vipos FC's Jeronimo Abreu got a good chance for a goal in the 27th minute, but he totally mistimed the shot and it went over the crossbar. A collision led to Vipos FC getting a freekick after 31 minutes play. Victor Abilio hit a great ball. 32 minutes into the game, Robustiano Machado cracked a shot to the right of the goalkeeper, 0-1. Lucas Casado was not in position, and could only watch the ball fly in. In the 35th minute, Robustiano Machado got an opportunity to score, but he didn't get a solid hit on the ball and ended up kicking it wide of the goal. Cipriano Seber kicked well hit freekick during the 37th minute of the match. After 40 played minutes Vipos FC got a freekick which was hit by Leopoldo Salvadore. After a rather tough play, Vipos FC's Lisandro Miliano got a free kick in the 41st minute. Luck had favoured the away team in the first, and they walked off with a 0-1 lead.

Both teams looked relatively alert before the second half when the referee blew his whistle to tell Robustiano Machado to make the kick off. Lucas Casado showed brilliant goalkeeper skills when he caught the ball after a hard shot from Cipriano Seber in the 55th minute of the match. After a defensive mix-up in Vipos FC's zone, Abelardo Tome stole the ball and had only the goalie to beat. Lucas Casado came out of the goal and Abelardo Tome tried to chip the ball over his head. To his dismay, the ball went over the crossbar and out of play. Robustiano Machado's shot when he came free in front of the goal in the 59thth minute, Lucas Casado skillfully showed off with a save to what seemed to be an obvious goal. 64 minutes into the match, Vipos FC's goal looked a bit too open when Ricardo Aznar came free, but Lucas Casado reached the ball before it rolled over the goal line. In the 65th minute, Robustiano Machado reached a very good position and smashed the ball with a huge effort into the net, just to the left of Lucas Casado. The goal made the score 0-2. In the 69th minute the ball was on its way in behind Vipos FC's goalkeeper Lucas Casado, but with the help of a sacrificing defense, he could catch the ball at the crossbar. After 87 minutes, Robustiano Machado made it 0-4 with a short kick to the right side. Vipos FC's Lucas Casado tried to save the shot but he was too slow in reacting to the shot. In the 92nd minute, Robustiano Machado got an opportunity to score, but he didn't get a solid hit on the ball and ended up kicking it wide of the goal. Through an outstanding action, after 94 minutes, Lucas Casado successfully got his hands on the ball before it slid into the goal at the right post. In the 96th minute Robustiano Machado shot on, it seemed, an open goal, but Lucas Casado saw the ball coming and threw himself on it before it passed the goal line. Desfachatados F.C.'s players went to the stands to thank the travelling support. The fan's backing had helped spurr the team on to a fine performance that won them the match.