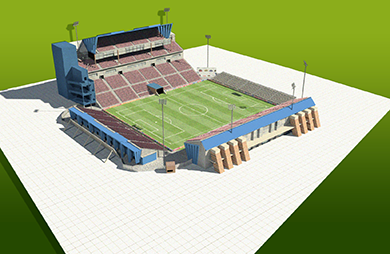 When the second half was about to start, both teams quickly lined up and Ali Haydar Şehzat made a kick off. Oren Lamb sent away a hard shot on goal in the 57th minute, but the ball went just over the crossbar and out. A very good chance. ForestFire were furious when Van Jennings was red carded, 60 minutes into the game, but the referee dismissed their protests. Van Jennings hit a great freekick 61 minutes into the match. Dylan Smalls took care of the ball after a well-directed shot from Nicodim Cârjă, even though the ball almost passed him on his left side. The supporters of ForestFire booed when S.D. Bajen was adjudged a doubtful freekick after 70 match minutes in a wonderful position. Sydney Alonzo didn't get a good kick on the ball. ForestFire made a substitution. İhsan Sadi replaced Ken Ivey. After a rather tough play, S.D. Bajen's Sydney Alonzo got a free kick in the 72nd minute. Shannon Mendez's shot was meant for the net just under the crossbar, but Rufus Bryant read the situation well and was quickly in position to make a wonderful save in the 73rd minute of play. 75 minutes into the match, ForestFire's goal looked a bit too open when Arda Nurettin came free, but Dylan Smalls reached the ball before it rolled over the goal line. In the 78th minute, İhsan Sadi hit a crossing free kick to the open man running down the field. Nicodim Cârjă's shot was meant for the net just under the crossbar, but Dylan Smalls read the situation well and was quickly in position to make a wonderful save in the 81st minute of play. 81 minutes into the game, Nicodim Cârjă was given a yellow card after he appeared to trip an opposing player. S.D. Bajen's manager was livid on the sidelines, but the referee was unmoved and gave ForestFire the free kick. A collision led to S.D. Bajen getting a freekick after 82 minutes play. Nicodim Cârjă hit a great ball. After having played for 93 minutes, İhsan Sadi managed to get in a good position for a shot on goal. ForestFire's supporters crossed their fingers, but İhsan Sadi was, after a quick turn that froze the defenders, out of balance and shot the ball just to the right of the goal. With a little luck, S.D. Bajen's Rufus Bryant got control of the ball when İhsan Sadi tried to sneak it across the goal line. The final whistle blew with the score still tied, and both teams left the pitch thinking about the missed chances that could have given their team the win.