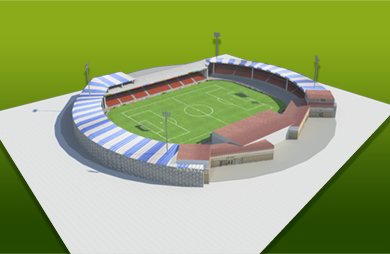 Spectators: 7714 (Terracing: 5787, Seating: 1774, VIP seats: 153) The mood of the audience was pleasant when Polentzi Ares made the kick off which started today's match. Xavier Nogueira made an important save on a dangerous shot by Jorge Valiente in the 3rd minute. Xavier Nogueira was a little too slow when Jorge Valiente got a fine hit on the ball which went right into the goal in the 3rd minute. The score was now 1-0. If Polentzi Ares had kept his shot down it would have been a goal in the 6th minute. The ball went over the crossbar and out instead. In the last second Xavier Nogueira throw himself and got hold of the ball when Ariel Fernendo in the 8thth minute from his position got away a shot towards the right post. Laureano Luzea showed his good apprehension of the play when he made a fantastic save on a shot from Polentzi Ares, who was totally free with the ball in the 15th minute. 17 minutes into the match, Patay Juniors's goal looked a bit too open when Robinho Vianna came free, but Laureano Luzea reached the ball before it rolled over the goal line. In the 21st minute, Robinho Vianna made a precise shot to the right of Laureano Luzea. Patay Juniors's defense was at fault, and the scoreboard reflected the new score, 1-1. In the 24th minute Polentzi Ares shot on, it seemed, an open goal, but Laureano Luzea saw the ball coming and threw himself on it before it passed the goal line. AV & AA's goalkeeper couldn't reach when Ariel Fernendo 25 minutes into the game got a good kick on the ball which found its way into goal just inside left pole. 2-1. Laureano Luzea made a wonderful reflex save on a shot from Erubiel Heriberto in the 29th minute of play. When Patay Juniors's Ariel Fernendo in the 31st minute got a chance for a shot 31st didn't hesitate and placed the ball to the right of the goalie. A beautiful save bye AV & AA's goalie prevented a goal. With an all-out effort, Patay Juniors's Xavier Nogueira threw himself towards the right post 32 minutes into the match and grabbed hold of the ball from Ariel Fernendo, which otherwise would have been placed in the net. After 40 minutes AV & AA's defender was forced to head the ball over the line for a corner. It was Jeronimo Frichoso who took care of the corner kick. A well-hit corner resulted in Silverio Nuxila heading the ball towards the goal, but to his dismay he misdirected it and missed the goal completely. Laureano Luzea stood for a superb save when he managed to get hold of Polentzi Ares's shot from short distance in the 44th minute. When the match had gone on for 46 minutes, Jorge Valiente took a quick shot and it went in 4-1 without a chance for Xavier Nogueira to make any attempt to save it. No-one was surprised that the home team were leading 4-1 at half-time.

Xavier Nogueira showed his good apprehension of the play when he made a fantastic save on a shot from Roque Theodore, who was totally free with the ball in the 54th minute. Robinho Vianna sent away a hard shot on goal in the 56th minute, but the ball went just over the crossbar and out. A very good chance. After 60 minutes, Jorge Valiente made it 5-1 with a short kick to the right side. AV & AA's Xavier Nogueira tried to save the shot but he was too slow in reacting to the shot. The audience was convinced that Erubiel Heriberto's extremely hard shot when he got free in front of the goal was going in, but Laureano Luzea was relentless in the 63rd minute of the game. In a very dangerous position, a player in Patay Juniors fell when an opponent tried to get the ball from him in the 66th minute. Penalty! Laureano Luzea had in the 67thth minute some difficulties stopping Robinho Vianna's well aimed penalty as it nearly passed him on his left side, but he still managed to hold the ball. An unexpectedly hard shot by Polentzi Ares in the 69th minute of play forced Patay Juniors's goalkeeper Laureano Luzea to throw himself to the left, to be able to save the ball. In the 71st minute of the match AV & AA got a corner. Patay Juniors's goalie ran out to the linesman to protest the call, but the linesman resolutely pointed his flag at the cornerflag. Esteve Cordaro ran over to the corner to take the kick. 72 minutes into the match, Patay Juniors's goal looked a bit too open when Polentzi Ares came free, but Laureano Luzea reached the ball before it rolled over the goal line. Ariel Fernendo sent away a hard shot on goal in the 74th minute, but the ball went just over the crossbar and out. A very good chance. Laureano Luzea took care of the ball after a well-directed shot from Robinho Vianna, even though the ball almost passed him on his left side. Laureano Luzea came out of the goal in the 79th minute to try and stop a shot by AV & AA's Robinho Vianna. But to his dismay, Robinho Vianna quickly shot the ball in between his legs and into the goal making it 5-2. With a little luck, Patay Juniors's Laureano Luzea got control of the ball when Robinho Vianna tried to sneak it across the goal line. The crowd rose to their feet as Robinho Vianna kicked a wonderful shot that went in to the left of a diving Laureano Luzea. That made the score 5-3 in the 86 minute of play. Patay Juniors's defense didn't have a chance, in the 89th minute, when Polentzi Ares scored to the left of an out of position Laureano Luzea, making the score, 5-4. Patay Juniors's fans were exulted and cheered after their team won in a match that could easily have gone the other way.