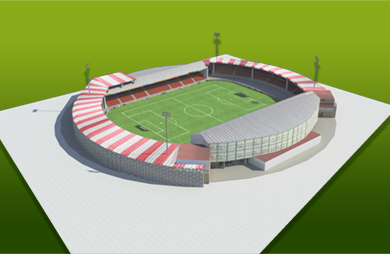 Spectators: 157 (Terracing: 118, Seating: 36, VIP seats: 3) The field was rather wet after several days of rain when Alvaro Kaxen took the kick off in the first half of the match. 5 minutes into the match, Alvaro Kaxen dribbled the ball past the defender and swiftly kicked the ball to the left of Marcin Jarosz, 1-0. Isidoro Esdras took care of the ball after a well-directed shot from Bento Sepulveda, even though the ball almost passed him on his left side. Isidoro Esdras showed his good apprehension of the play when he made a fantastic save on a shot from Bento Sepulveda, who was totally free with the ball in the 15th minute. 17 minutes into the match, PelBis TraBiesos's goalkeeper Marcin Jarosz had to clear away a ball on his right side after a cunning shot by Nicanor Cristofor. After 18 minutes of play, Associazione Calcio MILAN's Tadeusz Bartochowski made it 2-1 when he simply outclassed the defender marking him and hit a curling shot into the right side of the net. Marcin Jarosz was left in no man's land by his defense there! Isidoro Esdras showed brilliant goalkeeper skills when he caught the ball after a hard shot from Bento Sepulveda in the 22nd minute of the match. 28 minutes into the match, PelBis TraBiesos's goal looked a bit too open when Nicanor Cristofor came free, but Marcin Jarosz reached the ball before it rolled over the goal line. After 28 played minutes Associazione Calcio MILAN got a freekick which was hit by Cyryl Naumowicz. Alvaro Kaxen fired away a screaming shot towards the goal in the 35th minute, but the shot went just over the crossbar without Marcin Jarosz having to interfere. In the 40th minute of the match, Tadeusz Bartochowski tried to roll the ball into the goal by the right post, but Marcin Jarosz saw his intentions and got control of the ball before it passed the line. Tadeusz Bartochowski's shot was meant for the net just under the crossbar, but Marcin Jarosz read the situation well and was quickly in position to make a wonderful save in the 43rd minute of play. No-one was surprised that the home team were leading 2-1 at half-time.