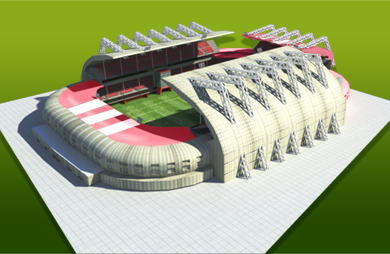 Spectators: 7723 (Terracing: 5793, Seating: 1776, VIP seats: 154) Roque Odín made the kick off and thus started the match. After a rather tough play, Khachatryan's Percy Lusk got a free kick in the 4th minute. In the 7th match minute, Khachatryan was awarded a freekick, the ball was picked up by Lance Bowers to maneuver through the defense. 9 minutes into the match, Roque Odín had an open shot that he just couldn't miss and scored to the right of Del Irvin. Khachatryan's manager could be seen yelling to the referee that Roque Odín was offside, but the referee ignored the protest. 0-1. Perico Llinares kicked well hit freekick during the 13th minute of the match. Pepe Toxeiro came out of the goal in the 18th minute to try and stop a shot by Khachatryan's Grigor Melkumyants. But to his dismay, Grigor Melkumyants quickly shot the ball in between his legs and into the goal making it 1-1. Pepe Toxeiro made a wonderful reflex save on a shot from Solomon Chappelle in the 23rd minute of play. Pepe Toxeiro took care of the ball after a well-directed shot from Grigor Melkumyants, even though the ball almost passed him on his left side. A collision led to Khachatryan getting a freekick after 27 minutes play. Dennis McGuire hit a great ball. Del Irvin took care of the ball after a well-directed shot from Roque Odín, even though the ball almost passed him on his left side. Pepe Toxeiro showed his good apprehension of the play when he made a fantastic save on a shot from Grigor Melkumyants, who was totally free with the ball in the 32nd minute. Kasey Arrington kicked well hit freekick during the 42nd minute of the match. 43 minutes into the match, Perico Llinares notched a goal, 1-2, to the right of Khachatryan's Del Irvin. Del Irvin was clearly disgusted with the effort of the defense and let the defenders know about it. Luck had favoured the away team in the first, and they walked off with a 1-2 lead.

The hometeam waved at the audience when it was time for Grigor Melkumyants to strike the kick off in the second half. In the 53rd minute, Real Club Celta de Vigo's Perico Llinares ran free of his marker and smoothly shot the ball into the goal behind Del Irvin. Del Irvin yelled at his defense, as they had left him out to dry. 1-3. Pepe Toxeiro showed brilliant goalkeeper skills when he caught the ball after a hard shot from Grigor Melkumyants in the 65th minute of the match. In the 69th minute, Lance Bowers hit a crossing free kick to the open man running down the field. Xandro Navarro, 70 minutes into the match, dribbled the ball up the side of the field and decided to take a long shot at the goal. Unfortunately, the ball was poorly hit and landed closer to the corner than to the goal. Steven Hudson kicked well hit freekick during the 73rd minute of the match. After a rather tough play, Real Club Celta de Vigo's Perico Llinares got a free kick in the 74th minute. When Kasey Arrington came up free with the goalie in the 77th minute, the Khachatryan fans jumped to their feet. But the shot missed the goal by a fraction of an inch, and the fans sat back down disappointed that Kasey Arrington couldn't finish the play. 80 minutes into the match, Khachatryan's goalkeeper Del Irvin had to clear away a ball on his right side after a cunning shot by Dalmu Buenafuente. Dennis McGuire got his second yellow card in the match during the 82nd minute which meant that he had to leave the ground. Khachatryan's Solomon Chappelle got a good chance for a goal in the 85th minute, but he totally mistimed the shot and it went over the crossbar. A collision led to Khachatryan getting a freekick after 90 minutes play. Lance Bowers hit a great ball. Dalmu Buenafuente fired away a screaming shot towards the goal in the 92nd minute, but the shot went just over the crossbar without Del Irvin having to interfere. The Khachatryan supporters were disappointed that their team didn't take anything from the match, despite matching Real Club Celta de Vigo's performance. The match ended with a win for Real Club Celta de Vigo.