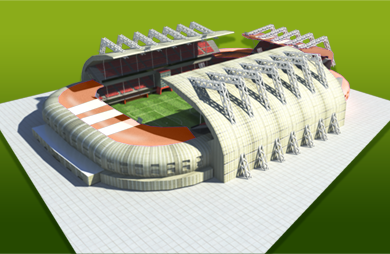 Spectators: 7855 (Terracing: 5892, Seating: 1807, VIP seats: 156) Alvaro Jusepe started the match with the kick off in front of an excited audience. Bernardo Armenta's shot when he came free in front of the goal in the 3rdth minute, Fabio Corderro skillfully showed off with a save to what seemed to be an obvious goal. 12 minutes into the match, Khachatryan's goal looked a bit too open when Alvaro Jusepe came free, but Jermaine Richmond reached the ball before it rolled over the goal line. Fabio Corderro made a wonderful reflex save on a shot from Aram Gasparyan in the 16th minute of play. Pretorianos FC's Fabio Corderro proved his good apprehension of play when he, in the 19th minute of the match, managed to save Pretorianos FC from getting a goal against them. The corner led Khachatryan's Arin Babayants to fire away a dangerous shot which Fabio Corderro despite some difficulties managed to get hold on the ball. Jermaine Richmond showed his good apprehension of the play when he made a fantastic save on a shot from Manuel Webers, who was totally free with the ball in the 23rd minute. 29 minutes into the match, Pretorianos FC's goalkeeper Fabio Corderro had to clear away a ball on his right side after a cunning shot by Xavier Duff. Khachatryan's attacker deliberately struck the ball against an opponent to win a corner for his team. The corner was taken by Arin Babayants in the 39th minute. Arin Babayants made a great header on Khachatryan's corner, it was just that Pretorianos FC's Fabio Corderro managed to reach the ball for a save. Fabio Corderro was out of position in the 45 minute of play, and Xavier Duff capitalized on the mistake with a soft shot into the goal. Xavier Duff really showed his touch with that goal: 1-0. No-one was surprised that the home team were leading 1-0 at half-time.