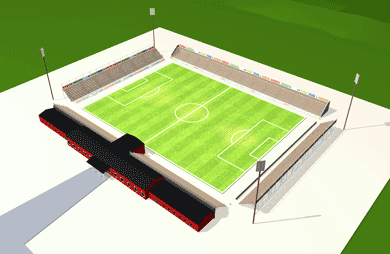 Spectators: 5000 (Terracing: 4000, Seating: 1000, VIP seats: 0) Berdier FC's Patricio Demesio started the match with a crisp pass. The crowd had been anticipating this game for weeks and the excitement in the stadium was easily visible. Marciano Matthew made a fantastic save in the 15th minute, when Fabio Marcones sent off a good shot on target. After a rather tough play, Berdier FC's Ariel Jaume got a free kick in the 18th minute. After a rather tough play, Berdier FC's Isidro Magdaleno got a free kick in the 23rd minute. Lisandro Sergi took care of the ball after a well-directed shot from Adrian Viator, even though the ball almost passed him on his left side. After 29 minutes, Silverio Guillelme mouthed his way into the referee's book. The tension between the Berdier FC and the Horcones FC players grew even worse after the yellow card. The supporters of Horcones FC booed when Berdier FC was adjudged a doubtful freekick after 29 match minutes in a wonderful position. Silverio Guillelme didn't get a good kick on the ball. In the 31st minute Santo Frans shot on, it seemed, an open goal, but Marciano Matthew saw the ball coming and threw himself on it before it passed the goal line. After 33 played minutes Berdier FC got a freekick which was hit by Ariel Jaume. In the 35th minute of the match, Fabio Marcones got a very nice opportunity to score, but Marciano Matthew was well-placed and pushed the ball away from the goal at the left post. Marciano Matthew showed brilliant goalkeeper skills when he caught the ball after a hard shot from Santo Frans in the 36th minute of the match. Ariel Jaume could have scored with his fast shot on goal in the 40th minute of the match, but Marciano Matthew made a huge save. In the 41st minute, Octavio Dabi hit a crossing free kick to the open man running down the field. The crowd rose to their feet as Patricio Demesio kicked a wonderful shot that went in to the left of a diving Marciano Matthew. That made the score 1-0 in the 43 minute of play. With a little luck, Horcones FC's Marciano Matthew got control of the ball when Fabio Marcones tried to sneak it across the goal line. All the noise was coming from the home fans when the whistle went for half-time. The home team had fought hardest to put themselves in a deserved lead.