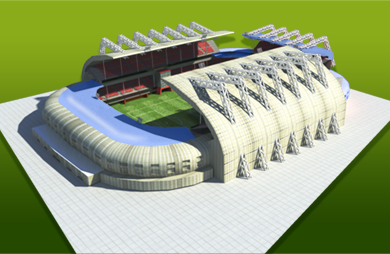 Spectators: 45 (Terracing: 35, Seating: 10, VIP seats: 0) JOLLYROGER's Vrasidas Chatzichristos started the match with a crisp pass. The crowd had been anticipating this game for weeks and the excitement in the stadium was easily visible. The audience was convinced that Vrasidas Chatzichristos's extremely hard shot when he got free in front of the goal was going in, but Marcelo-Luis Mendoza was relentless in the 7th minute of the game. In the 9th minute JOLLYROGER were awarded a corner. Nikos Paraskevakos went to the cornerflag to take it. The corner led JOLLYROGER's Nikos Paraskevakos to fire away a dangerous shot which Marcelo-Luis Mendoza despite some difficulties managed to get hold on the ball. In the 13th minute of the match, Zachery Greer got a very nice opportunity to score, but Sotiris Vrotsos was well-placed and pushed the ball away from the goal at the left post. After 14 minutes, Sakis Tsioublekos mouthed his way into the referee's book. The tension between the JOLLYROGER and the Atletico Patoruzu players grew even worse after the yellow card. After 14 played minutes JOLLYROGER got a freekick which was hit by Sakis Tsioublekos. The audience thought a goal was coming when Marcelo-Luis Paez got free with Sotiris Vrotsos in the 15th minute, but the goalkeeper managed to catch the ball with a huge effort. After 19 played minutes JOLLYROGER got a freekick which was hit by Charis Chatziaggelis. 21 minutes into the match, Charis Agathatos had an open shot that he just couldn't miss and scored to the right of Marcelo-Luis Mendoza. Atletico Patoruzu's manager could be seen yelling to the referee that Charis Agathatos was offside, but the referee ignored the protest. 0-1. Sotiris Vrotsos took care of the ball after a well-directed shot from Marcelo-Luis Argentin, even though the ball almost passed him on his left side. After a rather tough play, Atletico Patoruzu's Marcelo-Luis Paez got a free kick in the 30th minute. After a rather tough play, Atletico Patoruzu's Marcus George got a free kick in the 32nd minute. Sotiris Vrotsos made an important save on a dangerous shot by Zachery Greer in the 40th minute. An unexpectedly hard shot by Vrasidas Chatzichristos in the 41st minute of play forced Atletico Patoruzu's goalkeeper Marcelo-Luis Mendoza to throw himself to the left, to be able to save the ball. The crowd was extremely unhappy with the home team's performance in the first half. They were losing 0-1.