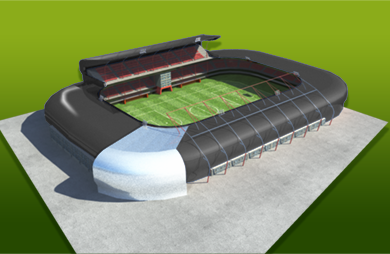 Spectators: 383 (Terracing: 288, Seating: 88, VIP seats: 7) Liverbird FCC's Ali Becker proved his good apprehension of play when he, in the 3rd minute of the match, managed to save Liverbird FCC from getting a goal against them. A collision led to Liverbird FCC getting a freekick after 5 minutes play. Humberto Iraitz hit a great ball. Przemyslaw Dudkowski fired away a screaming shot towards the goal in the 8th minute, but the shot went just over the crossbar without Ali Becker having to interfere. A sloppy throw-in by Radoslaw Nakonieczny in the 14th minute of the game went astray and was snapped up by Liverbird FCC's Jorge Olmos. Leszek Rydzewski showed brilliant goalkeeper skills when he caught the ball after a hard shot from 雷源旭 in the 23rd minute of the match. Ali Becker took care of the ball after a well-directed shot from Hugon Szpakowski, even though the ball almost passed him on his left side. In the 30th minute, Jorge Olmos left the goalkeeper for dead before tapping the ball into the right side of the net. The Liverbird FCC fans were clearly happy with the effort and the scoreboard reflected the new score: 1-1. Fernan Harriet hit a great freekick 37 minutes into the match. With a couple of smart ball manuevers 雷源旭 in the 40th managed to get into a good position. With a left leg Leszek Rydzewski saved Chelmza Team from getting behind. In the 47th minute, Radoslaw Nakonieczny hit a crossing free kick to the open man running down the field. Even after changing tactics the home team jogged off the field with a 1-2 deficit. They would have to work harder if they wanted to turn things around in the second half.