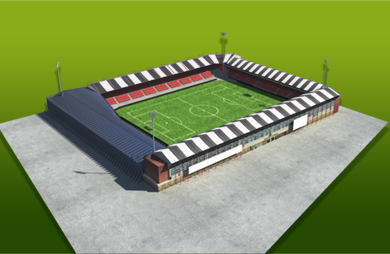 Spectators: 36 (Terracing: 28, Seating: 8, VIP seats: 0) It was fairly windy and cold on the field when Ariel Regis kicked off to start the match. When Lisandro Mincho fell near the penalty area in the 3rd minute he thought he would be awarded a free kick. The referee ignored Monte Hermoso Beach's protests and gave Lisandro Mincho a yellow card for diving instead. Lisandro Mincho hit a great freekick 3 minutes into the match. Freddy Goi sent away a hard shot on goal in the 10th minute, but the ball went just over the crossbar and out. A very good chance. Ariel Regis struck a weak shot in the 17th minute. Rosendo Salvidor didn't even have to move as the ball rolled over the line well wide of the goal. A wasted opportunity for Monte Hermoso Beach. Matildo Fillol made a fantastic save in the 21st minute, when Dalmacio Nabar sent off a good shot on target. Godfredo Ekaitz could have scored with his fast shot on goal in the 26th minute of the match, but Matildo Fillol made a huge save. In the 32nd minute, Ariel Regis ran past the defenders and hit a shot which went straight ahead into goal. Rosendo Salvidor was frozen by the shot and now it was 0-1. The audience was convinced that Ariel Regis's extremely hard shot when he got free in front of the goal was going in, but Rosendo Salvidor was relentless in the 37th minute of the game. 38 minutes into the match, Monte Hermoso Beach's goalkeeper Matildo Fillol had to clear away a ball on his right side after a cunning shot by Dalmacio Nabar. Matildo Fillol stood for a superb save when he managed to get hold of Godfredo Ekaitz's shot from short distance in the 39th minute. Freddy Goi hit a great freekick 42 minutes into the match. After 43 minutes, Adrian Frascuelo mouthed his way into the referee's book. The tension between the Monte Hermoso Beach and the Zucundum FC players grew even worse after the yellow card. In the 43rd match minute, Monte Hermoso Beach was awarded a freekick, the ball was picked up by Adrian Frascuelo to maneuver through the defense.

The players of the away team seemed most concentrated when Godfredo Ekaitz stepped up to make the kick off in the second half. In the 51st minute Godfredo Ekaitz shot on, it seemed, an open goal, but Matildo Fillol saw the ball coming and threw himself on it before it passed the goal line. Rene Igon received a nice pass in the box and took a hard shot in the 56th minute. Matildo Fillol tensed up and prepared to dive, but the shot went over the goal with him having to interfere. Monte Hermoso Beach's Matildo Fillol played magnificently when he managed to stop the ball from hitting the goal, after a sharp shot by Dalmacio Nabar in the 57th minute of play. After 61 minutes, Modesto Froylan mouthed his way into the referee's book. The tension between the Zucundum FC and the Monte Hermoso Beach players grew even worse after the yellow card. After a rather tough play, Zucundum FC's Modesto Froylan got a free kick in the 61st minute. In the 63rd match minute, Zucundum FC was awarded a freekick, the ball was picked up by Godfredo Ekaitz to maneuver through the defense. When Monte Hermoso Beach's Ariel Regis in the 65th minute got a chance for a shot 65th didn't hesitate and placed the ball to the right of the goalie. A beautiful save bye Zucundum FC's goalie prevented a goal. Matildo Fillol showed his good apprehension of the play when he made a fantastic save on a shot from Dalmacio Nabar, who was totally free with the ball in the 71st minute. Freddy Goi's late challenge caught a Zucundum FC's player on the shin and left him crawling around in pain. The referee blew his whistle and produced the yellow card. Freddy Goi helped the player get up and apologised. In the 73rd match minute, Monte Hermoso Beach was awarded a freekick, the ball was picked up by Freddy Goi to maneuver through the defense. After having played for 75 minutes, Ariel Regis managed to get in a good position for a shot on goal. Monte Hermoso Beach's supporters crossed their fingers, but Ariel Regis was, after a quick turn that froze the defenders, out of balance and shot the ball just to the right of the goal. Julio Telmo kicked well hit freekick during the 79th minute of the match. Modesto Froylan was shown his second yellow card after 82 minutes, following a rather ugly tackle on opponent. That was the end of his participation in the match. After 83 played minutes Zucundum FC got a freekick which was hit by Modesto Froylan. Godfredo Ekaitz charged in rather forcefully in the 86th minute of the match, and managed to knock his opponent down. The referee showed Godfredo Ekaitz the yellow card, and asked the players to shake hands before continuing play. After a rather tough play, Zucundum FC's Godfredo Ekaitz got a free kick in the 87th minute. Rene Igon sent away a hard shot on goal in the 89th minute, but the ball went just over the crossbar and out. A very good chance. Rosendo Salvidor showed brilliant goalkeeper skills when he caught the ball after a hard shot from Ariel Regis in the 94th minute of the match. Monte Hermoso Beach were delighted with the way they had won the match. They had held their defensive line well and made the most of their chances, to claim a victory over Zucundum FC's much stronger midfield.