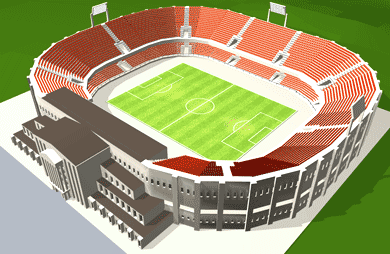 Spectators: 7510 (Terracing: 5633, Seating: 1727, VIP seats: 150) Nazca AFC's Justo Florian started the match with a crisp pass. The crowd had been anticipating this game for weeks and the excitement in the stadium was easily visible. When Vinicio Eliu fell near the penalty area in the 2nd minute he thought he would be awarded a free kick. The referee ignored Nazca AFC's protests and gave Vinicio Eliu a yellow card for diving instead. In the 3rd match minute, Nazca AFC was awarded a freekick, the ball was picked up by Vinicio Eliu to maneuver through the defense. Saul Fernandez stood for a superb save when he managed to get hold of Victorio Rito's shot from short distance in the 6th minute. Facundouba FC were awarded a corner in the 14th minute after Nazca AFC's defender lost control of the ball, allowing it to roll out over the line. Silvio Olo took the corner. Nazca AFC's goalkeeper couldn't reach when Victorio Rito 19 minutes into the game got a good kick on the ball which found its way into goal just inside left pole. 1-0. In the 22nd minute, Justo Florian got an opportunity to score, but he didn't get a solid hit on the ball and ended up kicking it wide of the goal. After 23 played minutes Facundouba FC got a freekick which was hit by Rigoberto Arlo. Ramiz Zoral made a wonderful reflex save on a shot from Justo Florian in the 24th minute of play. After having played for 25 minutes, Victorio Rito managed to get in a good position for a shot on goal. Facundouba FC's supporters crossed their fingers, but Victorio Rito was, after a quick turn that froze the defenders, out of balance and shot the ball just to the right of the goal. In the 30th minute Celso Transito shot on, it seemed, an open goal, but Saul Fernandez saw the ball coming and threw himself on it before it passed the goal line. 32 minutes into the game, Robustiano Quintana was given a yellow card after he appeared to trip an opposing player. Nazca AFC's manager was livid on the sidelines, but the referee was unmoved and gave Facundouba FC the free kick. Victorio Rito scored 3-0 in the 35th match minute with a shot that went into the goal to the right of Saul Fernandez, who was just a little too slow in reacting to the shot. Facundouba FC's Victorio Rito was standing unmarked in front of the goal when he, in the 40th play minute, got the ball and easily drilled it into the goal. The supporters of Nazca AFC booed when Facundouba FC was adjudged a doubtful freekick after 44 match minutes in a wonderful position. Alejandro Sasoin didn't get a good kick on the ball. In the 45th minute of the match Nicasio Gabon sent off a long shot with destination to the right of the goalkeeper, but Ramiz Zoral skillfully saved the ball. After 46 minutes of play, Facundouba FC's Gustavo Napoli made it 5-0 when he simply outclassed the defender marking him and hit a curling shot into the right side of the net. Saul Fernandez was left in no man's land by his defense there! No-one was surprised that the home team were leading 5-0 at half-time.