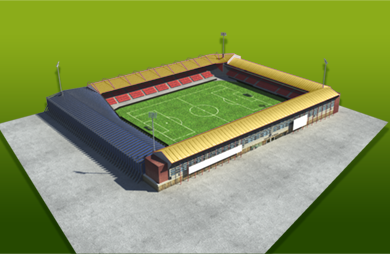 Spectators: 7312 (Terracing: 5485, Seating: 1682, VIP seats: 145) It was fairly windy and cold on the field when Teobald Nienajadlo kicked off to start the match. When Emil Hendzel came up free with the goalie in the 3rd minute, the GKS Katowice fans jumped to their feet. But the shot missed the goal by a fraction of an inch, and the fans sat back down disappointed that Emil Hendzel couldn't finish the play. Wasyl Lepper recieved an excellent pass in front of the goal in the 8th minute. Unfortunately, he received the ball on his off foot and could only manage a weak shot that went over the goal. In the 9th match minute, Cisów SA was awarded a freekick, the ball was picked up by Edward Badanowski to maneuver through the defense. In the 10th minute of the match Kazimierz Sobczak shot from a long distance. The ball could have gone into the goal to the right of the goalkeeper, but Wojciech Kornatowski showed his good shape when he easily got hold of the ball. Lukasz Jakisz made an important save on a dangerous shot by Wincenty Lato in the 17th minute. Wasyl Lepper fired away a screaming shot towards the goal in the 19th minute, but the shot went just over the crossbar without Wojciech Kornatowski having to interfere. In the 21stth minute of the game Teobald Nienajadlo who was perfectly placed tried to make a shot on goal, but GKS Katowice's Lukasz Jakisz was lucky and managed to grab hold of the ball. A collision led to GKS Katowice getting a freekick after 26 minutes play. Zbyszko Banan hit a great ball. In the 30th minute, Wasyl Lepper hit a crossing free kick to the open man running down the field. 32 minutes into the game, GKS Katowice's Wasyl Lepper nearly tore a hole in the net with a booming shot. Wojciech Kornatowski made a valiant effort, but he could not reach the ball in time, 0-1. Wojciech Kornatowski showed brilliant goalkeeper skills when he caught the ball after a hard shot from Wasyl Lepper in the 38th minute of the match. With 40 minutes on the clock, Korneliusz Bondel commited a dangerous tackle. The referee had no choice but to show him the red card. In a very dangerous position, a player in Cisów SA fell when an opponent tried to get the ball from him in the 40th minute. Penalty! Luck had favoured the away team in the first, and they walked off with a 0-2 lead.

Hugon Tepper kicked well hit freekick during the 57th minute of the match. A collision led to Cisów SA getting a freekick after 58 minutes play. Zula Grocholski hit a great ball. Wojciech Kornatowski took care of the ball after a well-directed shot from Emil Hendzel, even though the ball almost passed him on his left side. 79 minutes into the game, Hugon Tepper recieved a splendid long ball, split the defenders, and gently placed the ball to the left of Wojciech Kornatowski. Hugon Tepper showed that you don't have to tear a hole in the net to score, 0-3. Hugon Tepper struck a weak shot in the 84th minute. Wojciech Kornatowski didn't even have to move as the ball rolled over the line well wide of the goal. A wasted opportunity for GKS Katowice. The supporters of GKS Katowice booed when Cisów SA was adjudged a doubtful freekick after 90 match minutes in a wonderful position. Teofil Czaplicki didn't get a good kick on the ball. With a little luck, Cisów SA's Wojciech Kornatowski got control of the ball when Wasyl Lepper tried to sneak it across the goal line. If Wasyl Lepper had kept his shot down it would have been a goal in the 96th minute. The ball went over the crossbar and out instead.