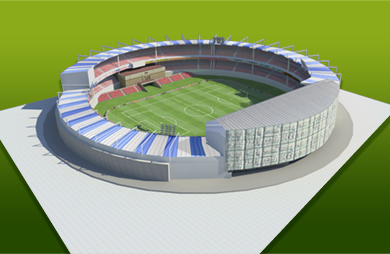 The hometeam waved at the audience when it was time for Daniel Rozanski to strike the kick off in the second half. Lucjan Palzewicz took the ball and in the 52 minute, shot a rapid shot to the right of a surprised Norbert Grondzki. Norbert Grondzki dived to the right, and did manage to get a hand on the shot, but it still went into the right corner making it 2-0. Norbert Grondzki made a wonderful reflex save on a shot from Bogdan Wlodyga in the 59th minute of play. KS LEW Chorzów's Tarzan Puyol managed, thanks to a brazen rush, stole the ball on a throw-in made by Juliusz Oryniak in the 64 minute of the game. After 65 played minutes Celebrities got a freekick which was hit by Juliusz Oryniak. When the match clock showed 68 minutes, the score became 2-1 when Igor Poling sped through Celebrities's defense and sent away a curving shot that went into the net to the right of Emil Noworolnik. Igor Poling blasted a shot towards the goal in the 71st minute, but the shot hit the top of the crossbar and went out without Emil Noworolnik having to make a save. The audience thought a goal was coming when Igor Poling got free with Emil Noworolnik in the 71st minute, but the goalkeeper managed to catch the ball with a huge effort. After 74 minutes of play, Celebrities's Bogdan Wlodyga made it 3-1 when he simply outclassed the defender marking him and hit a curling shot into the right side of the net. Norbert Grondzki was left in no man's land by his defense there! In the 79th minute the ball was on its way in behind KS LEW Chorzów's goalkeeper Norbert Grondzki, but with the help of a sacrificing defense, he could catch the ball at the crossbar. The referee was alert and spotted a serious foul by Damazy Poteralski during the 80th minute. The player immediately received a yellow card. Damazy Poteralski kicked well hit freekick during the 80th minute of the match. Bogdan Wlodyga received a nice pass in the box and took a hard shot in the 82nd minute. Norbert Grondzki tensed up and prepared to dive, but the shot went over the goal with him having to interfere. In the 83rd minute, Ryszard Bronkala hit a crossing free kick to the open man running down the field. Juliusz Oryniak took a chance and fired a shot far from the goal in the 84th minute, but it turned out to be a dangerous situation for Norbert Grondzki. KS LEW Chorzów's goalkeeper really had to stretch himself to stop the ball from crossing the goal line. Ziemowit Lemiesz scored 4-1 in the 87th match minute with a shot that went into the goal to the right of Norbert Grondzki, who was just a little too slow in reacting to the shot. In the 94th minute, Ziemowit Lemiesz made a precise shot to the right of Norbert Grondzki. KS LEW Chorzów's defense was at fault, and the scoreboard reflected the new score, 5-1. It was no surprise that this one had ended in a win for the home team. Celebrities had played much better football throughout.