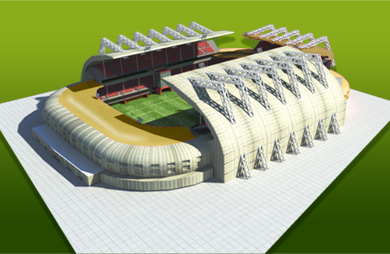 The players of the away team seemed most concentrated when Stig Bergman stepped up to make the kick off in the second half. In the 52nd minute, Witold Bentkowski left the goalkeeper for dead before tapping the ball into the right side of the net. The Pogoń Szczecin fans were clearly happy with the effort and the scoreboard reflected the new score: 2-0. In the 58th minute the ball was on its way in behind Pogoń Szczecin's goalkeeper Monico Bednarczyk, but with the help of a sacrificing defense, he could catch the ball at the crossbar. After 62 played minutes Heide FC got a freekick which was hit by Michal Piszczek. After a rather tough play, Heide FC's Cheng Feng Hao got a free kick in the 65th minute. Igor Dabrowski made a wonderful reflex save on a shot from Witold Bentkowski in the 66th minute of play. After some fancy dribbling in the 78th minute, Stig Bergman managed to get in a good position for a shot. Heide FC's supporters rose to their feet, but Stig Bergman was a bit off balance and shot the ball just wide of the left post. Monico Bednarczyk breathed a sigh of relief and went to take the goal kick. Heide FC's Krzysztof Arendarski was substituted for Robert Rutecki. After some careless play in the Pogoń Szczecin defense, Herbert Biraga kicked a shot that curved into the net to the right of Monico Bednarczyk. The Pogoń Szczecin fans voiced their displeasure as they felt that Monico Bednarczyk should have stopped the shot. In the 85th match minute, Heide FC was awarded a freekick, the ball was picked up by Krzysztof Arendarski to maneuver through the defense. Pogoń Szczecin's Olgierd Marosz managed, thanks to a brazen rush, stole the ball on a throw-in made by 陶霆庭 in the 92 minute of the game. Ales Nesta hit a great freekick 93 minutes into the match.