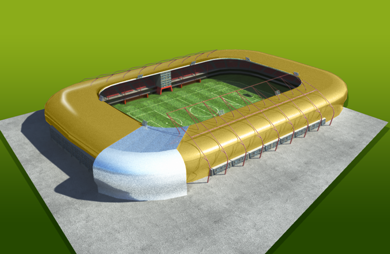 Spectators: 447 (Terracing: 336, Seating: 103, VIP seats: 8) In the 7th match minute, Miastostumostów was awarded a freekick, the ball was picked up by Miroslaw Panikowski to maneuver through the defense. 9 minutes had been played when some careless play by Miastostumostów's defense caused the ball to cross the line for a corner. Benedykt Daszkowski was slow to take the kick. During this time Sielce Warszawa's players had a chance to rest. Ola Gola kicked well hit freekick during the 11th minute of the match. When the match clock showed 16 minutes, the score became 0-1 when Wiktor Chojnacki sped through Sielce Warszawa's defense and sent away a curving shot that went into the net to the right of Willy Caballero. In the 21st minute, Paul Dybala got an opportunity to score, but he didn't get a solid hit on the ball and ended up kicking it wide of the goal. In the 27th minute Witold Tylenda shot on, it seemed, an open goal, but Willy Caballero saw the ball coming and threw himself on it before it passed the goal line. Willy Caballero took care of the ball after a well-directed shot from Paul Dybala, even though the ball almost passed him on his left side. After 30 minutes Sielce Warszawa's defender was forced to head the ball over the line for a corner. It was Witold Tylenda who took care of the corner kick. The corner led to Miastostumostów's Paul Dybala getting away a dangerous shot that went just outside the goal. 37 minutes into the match, Sielce Warszawa's goal looked a bit too open when Paul Dybala came free, but Willy Caballero reached the ball before it rolled over the goal line. Chineze Dang could have scored with his fast shot on goal in the 38th minute of the match, but Leszek Lataj made a huge save. After a rather tough play, Sielce Warszawa's Chineze Dang got a free kick in the 42nd minute. If Chineze Dang had kept his shot down it would have been a goal in the 45th minute. The ball went over the crossbar instead. In the 47th minute, Witold Tylenda hit a crossing free kick to the open man running down the field. Miastostumostów's Zdzislaw Pietrowiak was substituted for Marek Konieczny. Disappointed in the 0-1 score, the home team went to the dressing room to adjust tactics for the second half.

The hometeam waved at the audience when it was time for Chineze Dang to strike the kick off in the second half. Leszek Lataj showed his good apprehension of the play when he made a fantastic save on a shot from Chineze Dang, who was totally free with the ball in the 62nd minute. After some careless play in the Miastostumostów defense, Chineze Dang kicked a shot that curved into the net to the right of Leszek Lataj. The Miastostumostów fans voiced their displeasure as they felt that Leszek Lataj should have stopped the shot. Sielce Warszawa made a substitution. Michal Budacz replaced Wojciech Komornicki. After 80 minutes Sielce Warszawa's defender was forced to head the ball over the line for a corner. It was Witold Tylenda who took care of the corner kick. Cemalettin Laçin made in the 82nd minute of the game a throw-in that took a bad bounce and was taken care of by Sielce Warszawa's Robert Jenkot. 83 minutes into the match, Heinrich Schürch had an open shot that he just couldn't miss and scored to the right of Leszek Lataj. Miastostumostów's manager could be seen yelling to the referee that Heinrich Schürch was offside, but the referee ignored the protest. 2-1. 87 minutes into the match, Aírton Dionísio notched a goal, 2-2, to the right of Sielce Warszawa's Willy Caballero. Willy Caballero was clearly disgusted with the effort of the defense and let the defenders know about it. Willy Caballero made a fantastic save in the 93rd minute, when Wiktor Chojnacki sent off a good shot on target. Yu Yi Fan's late challenge caught a Sielce Warszawa's player on the shin and left him crawling around in pain. The referee blew his whistle and produced the yellow card. Yu Yi Fan helped the player get up and apologised. Yu Yi Fan hit a great freekick 97 minutes into the match. The teams fought very hard right up to the final whistle. Both sets of players were happy to go away with a draw.