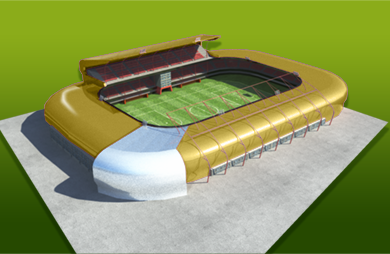 Spectators: 150 (Terracing: 113, Seating: 34, VIP seats: 3) The mood of the audience was pleasant when Jerzy Orlicki made the kick off which started today's match. Domenico Piccini might have been able to make a better finish in the 4th minute when he tried to place a hard shot over Eugen Curtean. Instead the ball went over the crossbar and out. Domenico Piccini ran back to his position shaking his head. Eugen Curtean made a wonderful reflex save on a shot from Domenico Piccini in the 4th minute of play. When the match clock showed 6 minutes, the score became 1-0 when Domenico Piccini sped through Fc Ursus Magura's defense and sent away a curving shot that went into the net to the right of Eugen Curtean. After 10 played minutes PONURE KOMBAJNY got a freekick which was hit by Federico Gattuso. 18 minutes into the match, Domenico Piccini notched a goal, 3-0, to the right of Fc Ursus Magura's Eugen Curtean. Eugen Curtean was clearly disgusted with the effort of the defense and let the defenders know about it. Fc Ursus Magura's attacker deliberately struck the ball against an opponent to win a corner for his team. The corner was taken by Tudor Fundătoreanu in the 23rd minute. The corner led Fc Ursus Magura's Dinu Colin to fire away a dangerous shot which Edward Domala despite some difficulties managed to get hold on the ball. PONURE KOMBAJNY's Edward Domala played magnificently when he managed to stop the ball from hitting the goal, after a sharp shot by Iustin Cămărășescu in the 25th minute of play. After 32 minutes of play, the referee blew the whistle. It was a penalty for Fc Ursus Magura! The goalkeeper, Eugen Curtean, was totally fooled by PONURE KOMBAJNY's Domenico Piccini, who 33 minutes into the game made a penalty shot that went in on the goalkeeper's left side. Filip Dijmărescu received a nice pass in the box and took a hard shot in the 39th minute. Edward Domala tensed up and prepared to dive, but the shot went over the goal with him having to interfere. Domenico Piccini scored 5-0 in the 41st match minute with a shot that went into the goal to the right of Eugen Curtean, who was just a little too slow in reacting to the shot. 43 minutes into the match, PONURE KOMBAJNY's Exequiel Palacios sent off a blazing shot straight on target, a shot that Eugen Curtean narrowly saved just below the crossbar. 45 minutes into the game, Jerzy Orlicki cracked a shot to the right of the goalkeeper, 6-0. Eugen Curtean was not in position, and could only watch the ball fly in. After a defensive mix-up in Fc Ursus Magura's zone, Exequiel Palacios stole the ball and had only the goalie to beat. Eugen Curtean came out of the goal and Exequiel Palacios tried to chip the ball over his head. To his dismay, the ball went over the crossbar and out of play.