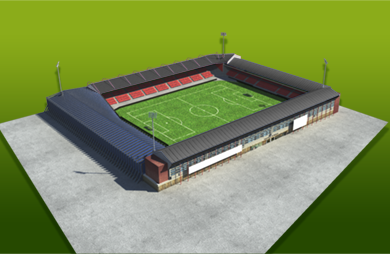 Spectators: 399 (Terracing: 300, Seating: 92, VIP seats: 7) The mood of the audience was pleasant when Bernard Brytka made the kick off which started today's match. 13 minutes into the match, Zachary Zawadzki dribbled the ball past the defender and swiftly kicked the ball to the left of Jan Blue, 1-0. When Stasio Bakes came up free with the goalie in the 16th minute, the F.C. Sosnowiec fans jumped to their feet. But the shot missed the goal by a fraction of an inch, and the fans sat back down disappointed that Stasio Bakes couldn't finish the play. 20 minutes into the game, F.C. Sosnowiec's Bernard Brytka nearly tore a hole in the net with a booming shot. Edgar Mlekodaj made a valiant effort, but he could not reach the ball in time, 1-1. Bernard Brytka blasted a shot towards the goal in the 25th minute, but the shot hit the top of the crossbar and went out without Edgar Mlekodaj having to make a save. Edgar Mlekodaj took care of the ball after a well-directed shot from Bernard Brytka, even though the ball almost passed him on his left side. With an all-out effort, Sielce Warszawa's Jan Blue threw himself towards the right post 26 minutes into the match and grabbed hold of the ball from Patryk Wozniak, which otherwise would have been placed in the net. F.C. Sosnowiec's Leszek Modliszewski managed, thanks to a brazen rush, stole the ball on a throw-in made by Zbigniew Jaraczeski in the 29 minute of the game. Jan Blue took care of the ball after a well-directed shot from Walery Bambas, even though the ball almost passed him on his left side. 34 minutes into the match, Sielce Warszawa's goal looked a bit too open when Bernard Brytka came free, but Edgar Mlekodaj reached the ball before it rolled over the goal line. 36 minutes into the game, Bernard Czarnecki cracked a shot to the right of the goalkeeper, 2-1. Jan Blue was not in position, and could only watch the ball fly in. Christian Kalfhage charged in rather forcefully in the 41st minute of the match, and managed to knock his opponent down. The referee showed Christian Kalfhage the yellow card, and asked the players to shake hands before continuing play. Edward Arnista took a chance and fired a shot far from the goal in the 42nd minute, but it turned out to be a dangerous situation for Jan Blue. F.C. Sosnowiec's goalkeeper really had to stretch himself to stop the ball from crossing the goal line. Jan Blue made an important save on a dangerous shot by Zachary Zawadzki in the 43rd minute. The away team players looked dejected as the walked off the pitch at half time. They had fought hard, but were still losing 3-1.