Deathbat Team
vs.
Sons of anarchy

Deathbat Team vs. Sons of anarchy: 4-1

Home
Away
Sons of anarchy 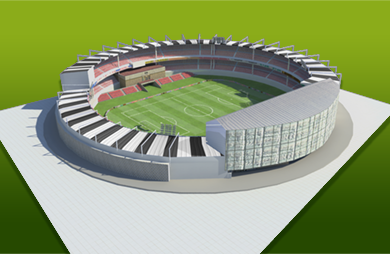 Spectators: 514 (Terracing: 386, Seating: 118, VIP seats: 10) Deathbat Team's Dariusz Trac started the match with a crisp pass. The crowd had been anticipating this game for weeks and the excitement in the stadium was easily visible. Gines Boces kicked well hit freekick during the 3rd minute of the match. In the 4th minute the ball was on its way in behind Sons of anarchy's goalkeeper Cezary Wawrukiewicz, but with the help of a sacrificing defense, he could catch the ball at the crossbar. Deathbat Team were awarded a corner in the 5th minute after Sons of anarchy's defender lost control of the ball, allowing it to roll out over the line. Pawel Chmelyk took the corner. It was a well-played corner which Kacper Chludzinski managed to volley towards the net. Unfortunately, he didn't get a great hit on the ball and it went out into the grandstand. 12 minutes had been played when some careless play by Sons of anarchy's defense caused the ball to cross the line for a corner. Pawel Chmelyk was slow to take the kick. During this time Deathbat Team's players had a chance to rest. After taking down the ball on Deathbat Team's corner Pawel Chmelyk fired away a hard shot, but the defenders efficiently covered the most dangerous angles and Cezary Wawrukiewicz quite easily take care of the ball. Sons of anarchy's Gines Boces suffered a sore thigh after 26 minutes and couldn't finish the game. After 26 minutes, Tomasz Bielejewski mouthed his way into the referee's book. The tension between the Deathbat Team and the Sons of anarchy players grew even worse after the yellow card. Sons of anarchy made a substitution. Teobald Hyska replaced Gines Boces. Cezary Wawrukiewicz was in the perfect position, and the defense had done a good job marking him, but Dariusz Trac showcased his skills and made a perfect shot to score 2-0 in the 32 minute of play. Sons of anarchy's Niklas Wallmark quite brazenly broke a throw-in by Tomasz Bielejewski, made in the 35th minute of the game. Eugeniusz Brzonkala kicked well hit freekick during the 37th minute of the match. After some fancy dribbling in the 43rd minute, Dariusz Trac managed to get in a good position for a shot. Deathbat Team's supporters rose to their feet, but Dariusz Trac was a bit off balance and shot the ball just wide of the left post. Cezary Wawrukiewicz breathed a sigh of relief and went to take the goal kick. Niklas Wallmark got a throw-in 45 minutes in the game and the ball was received by Shao Ling Li. When the referee blew for the end of the half the home team players were clearly happier, as they went in to the break leading 2-0.