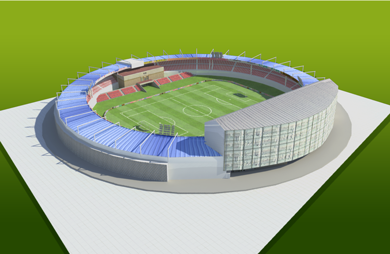 Spectators: 391 (Terracing: 294, Seating: 90, VIP seats: 7) It was fairly windy and cold on the field when Fabian Bântu kicked off to start the match. Naina Malhotra kicked well hit freekick during the 5th minute of the match. Bartosz Czajkowski took care of the ball after a well-directed shot from Slawomir Czysty, even though the ball almost passed him on his left side. The corner led ★C.I.A.sna★16's Naina Malhotra to fire away a dangerous shot which Bartosz Czajkowski despite some difficulties managed to get hold on the ball. In the 14th minute the ball was on its way in behind ★C.I.A.sna★16's goalkeeper Traian Magherescu, but with the help of a sacrificing defense, he could catch the ball at the crossbar. The audience thought a goal was coming when Naina Malhotra got free with Bartosz Czajkowski in the 19th minute, but the goalkeeper managed to catch the ball with a huge effort. 34 minutes into the game, Fabian Bântu was given a yellow card after he appeared to trip an opposing player. ￜDCￜ™KKS LECH 2006's manager was livid on the sidelines, but the referee was unmoved and gave ★C.I.A.sna★16 the free kick. A collision led to ￜDCￜ™KKS LECH 2006 getting a freekick after 34 minutes play. Fabian Bântu hit a great ball. Traian Magherescu made a wonderful reflex save on a shot from Zachariasz Basaik in the 36th minute of play. Traian Magherescu made a wonderful reflex save on a shot from Zachariasz Basaik in the 39th minute of play. Bartosz Czajkowski made a fantastic save in the 41st minute, when Slawomir Czysty sent off a good shot on target. In the 43rd minute of the match ￜDCￜ™KKS LECH 2006 got a corner. ★C.I.A.sna★16's goalie ran out to the linesman to protest the call, but the linesman resolutely pointed his flag at the cornerflag. Artur Piwowarski ran over to the corner to take the kick. Zachariasz Basaik was in a good position and managed to take a shot, but he missed just to the outside of the post.